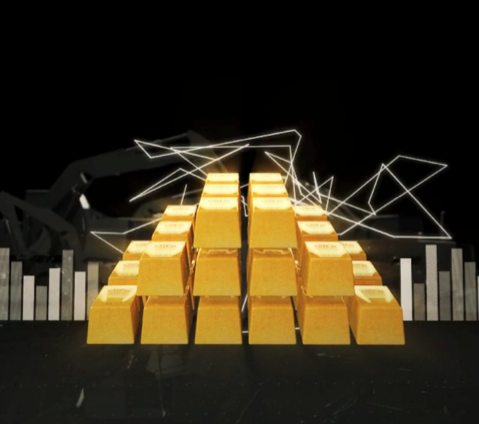 Bitcoin is a decentralized digital currency based on an open-source, peer-to-peer internet protocol. It was introduced in 2009 by a pseudonymous developer, Satoshi Nakamoto. Bitcoins can be exchanged through a computer or smartphone locally or internationally without an intermediate financial institution. In trade, one bitcoin is subdivided into 100 million smaller units called satoshis, defined by eight decimal places.

Bitcoin is not managed like typical currencies: it has no central bank or central organization. Instead, it relies on an Internet-based peer-to-peer network. The money supply is automated and given to servers or “bitcoin miners” that confirm bitcoin transactions as they add them to a decentralized and archived transaction log approximately every 10 minutes. 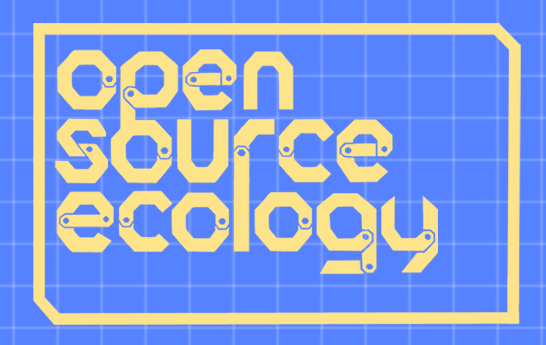 Open Source Ecology is a network of farmers, engineers, and supporters that for the last two years has been creating the Global Village Construction Set, an open source, low-cost, high performance technological platform that allows for the easy, DIY fabrication of the 50 different Industrial Machines that it takes to build a sustainable civilization with modern comforts. The GVCS lowers the barriers to entry into farming, building, and manufacturing and can be seen as a life-size lego-like set of modular tools that can create entire economies, whether in rural Missouri, where the project was founded, in urban redevelopment, or in the developing world.

The New Aesthetic was a design concept and netculture phenomenon launched into the world by London designer James Bridle in 2011. It continues to attract the attention of media art, and throw up associations to a variety of situated practices, including speculative design, net criticism, hacking, free and open source software development, locative media, sustainable hardware and so on. This is how we have considered the New Aesthetic: as an opportunity to rethink the relations between these contexts in the emergent episteme of computationality. There is a desperate need to confront the political pressures of neoliberalism manifested in these infrastructures. Indeed, these are risky, dangerous and problematic times; a period when critique should thrive. But here we need to forge new alliances, invent and discover problems of the common that nevertheless do not eliminate the fundamental differences in this ecology of practices. In this book, perhaps provocatively, we believe a great deal could be learned from the development of the New Aesthetic not only as a mood, but as a topic and fix for collective feeling, that temporarily mobilizes networks. Is it possible to sustain and capture these atmospheres of debate and discussion beyond knee-jerk reactions and opportunistic self-promotion? These are crucial questions that the New Aesthetic invites us to consider, if only to keep a critical network culture in place. 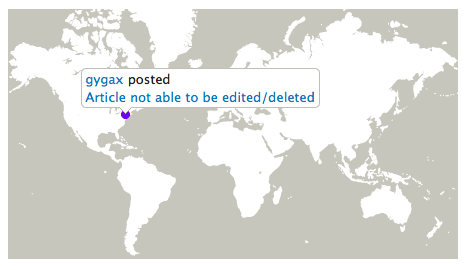 In this talk, Dries Buytaert (original creator and project lead of Drupal) shares his experiences on how he grew the Drupal community from just one person to over 800,000 members over the past 10 years. Today, the Drupal community is one of the largest and most active Open Source projects in the world, powering 1 out of 50 websites in the world. The concept of major projects growing out of a volunteer, community-based model is not new to the world. Volunteer networks and communities exist in many shapes and sizes. Throughout history there are examples of pure volunteer organizations that were instrumental in the founding and formation of many projects. For example, the first trade routes were ancient trackways which citizens later developed on their own into roads suited for wheeled vehicles in order to improve commerce. Transportation was improved for all citizens, driven by the commercial interest of some. Today, we certainly appreciate that our governments maintain the roads. However, we still see road signs stating that a particular section of a highway is kept clean and trim by volunteers — at least in some countries. When new ground needs to be broken, it’s often volunteer communities that do it. But a full-time, paid infrastructure can be necessary for the preservation and protection of what communities begin. In this presentation, Dries wants to brainstorm about how large communities evolve and how to sustain them over time.

Some questions to think about ahead of the presentation:

Tuesday, May 29, 12:30 pm
Berkman Center, 23 Everett Street, second floor
RSVP required for those attending in person via the form below
This event will be webcast live at 12:30 pm ET and archived on our site shortly after.

Via Berkman Center for Internet & Society 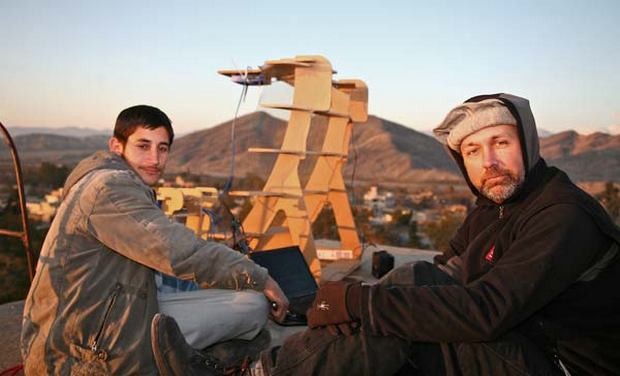 FabFi is an ambitious project which is creating Internet networks for eastern Afghanistan whose main components can be built out of trash. It’s low-tech, it’s simple–and it works.

The Afghan city of Jalalabad has a high-speed Internet network whose main components are built out of trash found locally. Aid workers, mostly from the United States, are using the provincial city in Afghanistan’s far east as a pilot site for a project called FabFi.

It’s a broadband apart from the covert, subversive “Internet in a suitcase” and stealth broadband networks being sponsored by the U.S., aimed at empowering dissidents, but the goal isn’t so different: bringing high-speed online access to the world’s most remote places.

Residents can build a FabFi node out of approximately $60 worth of everyday items such as boards, wires, plastic tubs, and cans that will serve a whole community at once. While it sounds like science fiction, FabFi could have important ramifications for entire swaths of the world that lack conventional broadband.

FabFi is an open source project that maintains close ties to MIT’s Fab Lab and the university’s Center for Bits and Atoms. At the moment, FabFi products are up and running in both Jalalabad and at three sites in Kenya, which collectively operate as an Internet service provider called JoinAfrica. Inside Afghanistan, FabFi networks are used to aid local businesses and to prop up community infrastructure such as hospitals and clinics. 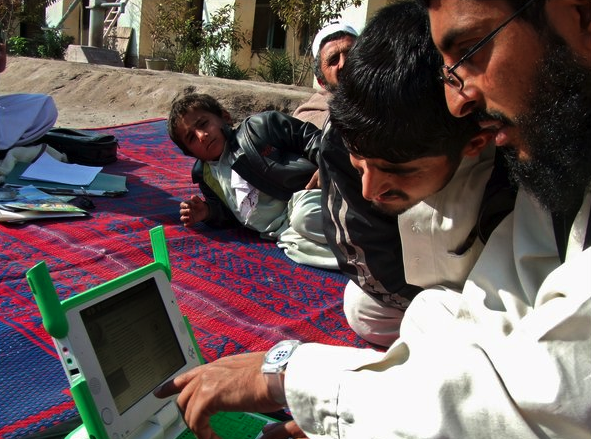 Three generations of a teaching family near Jalalabad, shown in 2009, discovered Wikipedia on a laptop from the One Laptop Per Child program. Their Internet access was facilitated by a FabFi network. Credit: Keith Berkoben/Fab Folk. NYT

i-weather.org is an international consortium created in 2001 that has set itself the goal of creating the world’s first artificial climate to satisfy the metabolic and physiological requirements of a human being in an environment partially or completely removed from earthly influences: mediated reality, networks and netlag, the disruption of the body clock that comes with air travel, as well as with extra-terrestrial trips and holidays.

Accessible everywhere and to everybody thanks to the Internet, this artificial climate called I-Weather makes it possible to live in a situation completely removed from natural locations by producing an artificial circadian rhythm synchronized to match the inner cycle of the human hormonal and endocrine system. In the absence of the natural terrestrial cycle of day and night, it becomes apparent that this inner cycle in fact lasts around 25 hours, and that body temperature, the alternation between sleep and wakefulness, and the accumulation and secretion of substances such as cortisone and oligopeptides, all depend on it. i-weather.org has therefore put together the first specifically human climate.

This version of I-Weather operates solely on the basis of fluctuations in the rate of melatonin, which in turn is influenced by variations in the intensity of light received by the retina. i-weather acts as a kind of personal artificial sun, oscillating over a 25-hour 7 minutes and 40 seconds period between a maximum light frequency of 652 THz and a minimum of 503 THz.

The original version of I-Weather was launched on 26 October 2001 (version 1.0). It has been improved on June 5, 2009 (version 2.0) as scientific knowledge of biological rhythms has evolved, demonstrating that melatonin regulation is enhanced by using a minimum wavelength of 460nm (blue) and a maximum wavelength of 597nm (orange) rather than between 385nm (deep purple) and 509nm (green). Actually, blue light suppresses the diffusion of melatonin in the body, while orange light allows performing actions without altering the body clock.

I-Weather is an open source, speculative architecture and art project. Its code exists for several platforms and can be downloaded for free to be used in personal projects (light installations, web sites, mobile phone applications, etc).