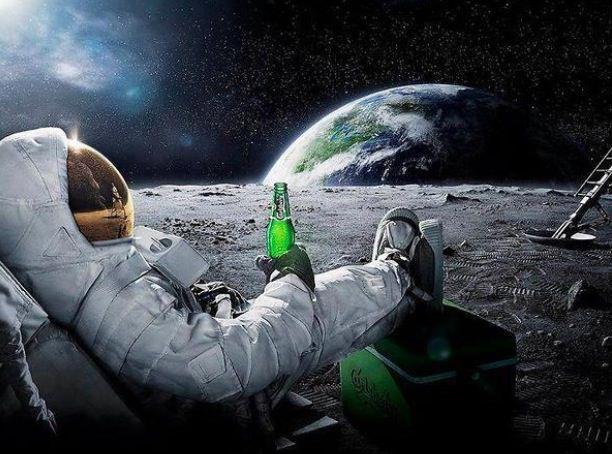 Our friends up the road at ILC Dover, a company that creates space suits for NASA, helped us get this unique and incredibly rare ingredient. We also used German malts and hops, and fermented this beer with our house Doggie yeast, giving Celest-jewel-ale notes of doughy malt, toasted bread, subtle caramel and a light herbal bitterness.

Exclusively served at Dogfish Head’s Rehoboth Beach brewpub, Celest-jewel-ale marks the September night of the harvest moon – the full moon closest to the fall equinox – whose brightness has traditionally helped farmers work into the evening. –

On top of the lunar meteorites, ILC is making sure this is the best-protected beer on the planet with koozies made from the same material as their space suits. The outer layer is Orthofabric, which is specially woven to have white Gore-Tex® PTFE on the exterior and Nomex® with a Kevlar® ripstop on the interior. The Gore-Tex is slippery to prevent friction between parts of the suit during movement and facilitate mobility. Its color also limits the absorption of solar energy.

Text and Image via Dogfish. Continue THERE

The most that scientists knew about Mercury, Venus, or Jupiter was their size, surface temperature, and atmospheric composition. But on Dec. 14, 1962, the Mariner 2 spacecraft flew by Venus. For the first time, researchers had detailed and up-close information about another world, helping spawn new scientific fields such as astrogeology and modern planetary science. The planets in our solar system changed from distant points to fully fledged worlds, with distinctive and amazing features.

“As Carl Sagan used to say, only one generation of humankind can be the first explorers of the solar system, and we are that generation,” USGS astrogeologist Michael Carr wrote in a recent issue of the American Geophysical Union’s weekly magazine Eos, about the last 50 years of solar system exploration.

Excerpt from an article via WIRED. Continue HERE 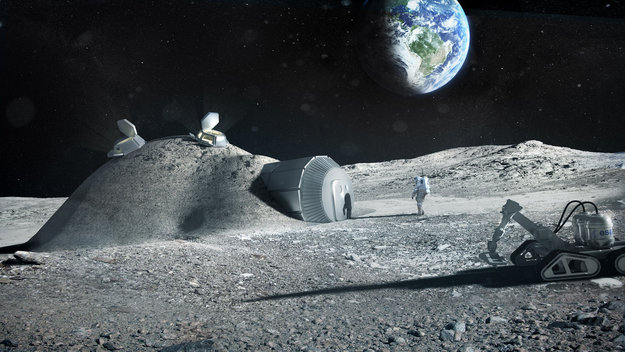 Setting up a lunar base could be made much simpler by using a 3D printer to build it from local materials. Industrial partners including renowned architects Foster + Partners have joined with ESA to test the feasibility of 3D printing using lunar soil.

“Terrestrial 3D printing technology has produced entire structures,” said Laurent Pambaguian, heading the project for ESA. “Our industrial team investigated if it could similarly be employed to build a lunar habitat.”

Foster + Partners devised a weight-bearing ‘catenary’ dome design with a cellular structured wall to shield against micrometeoroids and space radiation, incorporating a pressurised inflatable to shelter astronauts. A hollow closed-cell structure – reminiscent of bird bones – provides a good combination of strength and weight.

The base’s design was guided in turn by the properties of 3D-printed lunar soil, with a 1.5 tonne building block produced as a demonstration. “3D printing offers a potential means of facilitating lunar settlement with reduced logistics from Earth,” added Scott Hovland of ESA’s human spaceflight team. “The new possibilities this work opens up can then be considered by international space agencies as part of the current development of a common exploration strategy.” 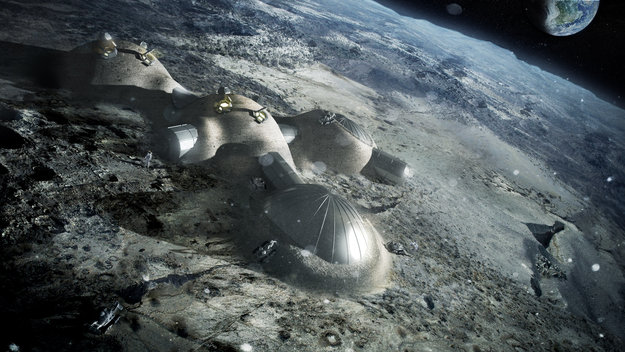 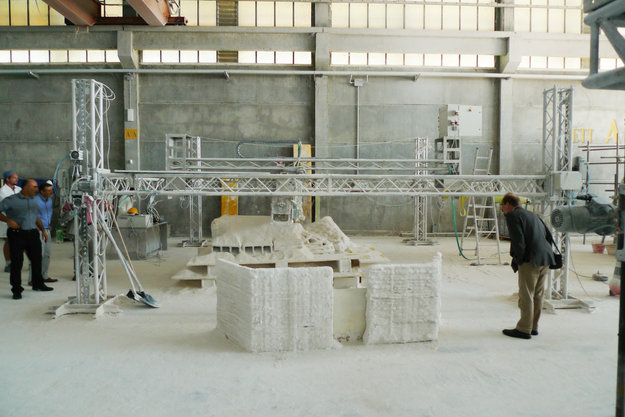 Astronauts Buzz Aldrin and Neil Armstrong in NASA’s training mockup of the Moon and lander module. Conspiracy theorists say that the film of the missions was made using similar sets to this training mockup.

The Moon landing conspiracy theories claim that some or all elements of the Apollo program and the associated Moon landings were hoaxes staged by NASA and members of other organizations. Hoax theories, saying Apollo astronauts had never walked on the Moon, began during the six manned landings (1969–1972). Various groups and individuals have continued to make conspiracy claims since the end of the Apollo program in 1975. Conspiracy theorists (henceforth conspiracists) consistently base their claims on the notion NASA and others knowingly misled the public into believing the landings happened by manufacturing, destroying, or tampering with evidence; including photos, telemetry tapes, transmissions, rock samples, and even some key witnesses.

Text and Images via Wikipedia

Reliable Internet access on the Moon, near Mars or for astronauts on a space station? How about controlling a planetary rover from a spacecraft in deep space? These are just some of the pioneering technologies that ESA is working on for future exploration missions.

What do observation or navigation satellites orbiting Earth have in common with astronauts sending images in real time from the International Space Station? They all need to send data back home. And the complexity of sharing information across space is set to grow.

In the future, rovers on Mars or inhabited bases on the Moon will be supported by orbiting satellite fleets providing data relay and navigation services. Astronauts will fly to asteroids, hundreds of millions of kilometres from Earth, and they’ll need to link up with other astronauts, control centres and sophisticated systems on their vessels.

All of these activities will need to be interconnected, networked and managed.

From year to year, the moon never seems to change. Craters and other formations appear to be permanent now, but the moon didn’t always look like this. Thanks to NASA’s Lunar Reconnaissance Orbiter, we now have a better look at some of the moon’s history.

Agnes Meyer Brandis’ poetic-scientific investigations weave fact, imagination, storytelling and myth, past, present and future. In “THE MOON GOOSE ANALOGUE: Lunar Migration Bird Facility (MGA)” the artist develops a narrative based on Godwin’s The Man in the Moone, in which the protagonist flies to the Moon in a chariot towed by ‘moon geese’. Meyer-Brandis has actualized this concept by raising eleven moon geese with astronauts’ names and imprinting them on herself as goose-mother. They live in a remote Moon analogue operated from a control room within the gallery.

This is the documentation of the project and installation:

The project consists of 3 main elements:

2. The Moon Analogue
a living space for geese, not-public installation in Italy

3. The Control Room
an installation in a public exhibition space

For further information please have a look at: ffur.de/mga

THE MOON GOOSE ANALOGUE: Lunar Migration Bird Facility
was commissioned by The Arts Catalyst and FACT Liverpool.
In partnership with: Pollinaria

“The space elevator will be built about 50 years after everyone stops laughing,” said science fiction writer Arthur C. Clarke, a long time ago.

Today, standing, theoretically, on the cusp of significant breakthroughs in the field of space exploration and the tantalizing prospect of a “Star Trek”, “Star Wars” and “2001: A Space Odyssey”- like scenario, we find ourselves asking what became of an idea so revolutionary it threatened to transform all our lives into something more commonly seen in sci-fi/alien-shooter video games and films – the space elevator! 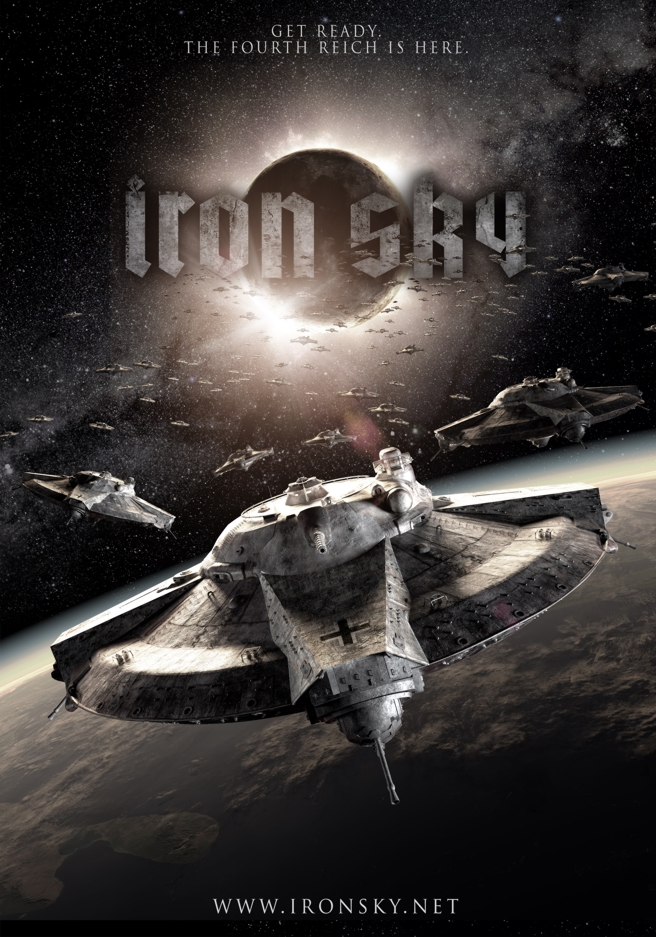 “Nazis on the moon” sounds like a punchline. But it’s actually the premise of the most talked-about feature at this year’s Berlin International Film Festival. The plot of Finnish entry “Iron Sky” revolves around “a group of Nazis who escape to the moon at the end of World War II to plan a new assault,” according to BBC News. “Added to the farce is a US President with more than a passing resemblance to former Alaska governor Sarah Palin, and a navy cruiser called the USS George W Bush.”

The most expensive film in Finnish history, “Iron Sky” has, according to BBCNews, “been hailed by some members of the international press as a sign that Germans are now at peace with their Nazi past.” But some Germans felt less comfortable. “Although I heard that audiences were laughing out loud, in my screening… it wasn’t like that,” Kerstin Sopke of the Associated Press told the BBC.

The film’s director, Timo Vuorensola, doesn’t see it that way either. “No, I absolutely think that’s not what’s it about,” he told The Arty Semite in an email.

I think that Germans have as a people moved away from the times, and have learned perhaps more than any other people in the world the horrors fascism brings, and know that history needs to be respected, but that the Germans living now (other than some very special cases) are not the ones who did the horrors. So they haven’t gotten ‘a peace with Nazi past,’ as BBC strangely words it, but they’ve understood that the current German youth did not do the bad things, thus making it possible to approach the subject with other emotions than the well-known ‘German guilt’. It’s time now to make sure it will never happen again.

Paul Scott Anderson at Universe Today: As “we” continue to explore farther out into our solar system and beyond, the question of habitation or colonization inevitably comes up. Manned bases on the Moon or Mars for example, have long been a dream of many. There is a natural desire to explore as far as we can go, and also to extend humanity’s presence on a permanent or at least semi-permanent basis. In order to do this, however, it is necessary to adapt to different extreme environments. On the Moon for example, a colony must be self-sustaining and protect its inhabitants from the airless, harsh environment outside.

Mars, though, is different. While future bases could adapt to the Martian environment as well, there is also the possibility of modifying the surrounding environment instead of just co-existing with it. This is the process of terraforming – essentially trying to tinker with Mars’ atmosphere and environment to make it more Earth-like. Although still a long ways off technologically, terraforming the Red Planet is seen as a future possibility. Perhaps the bigger question is, should we? Continue HERE