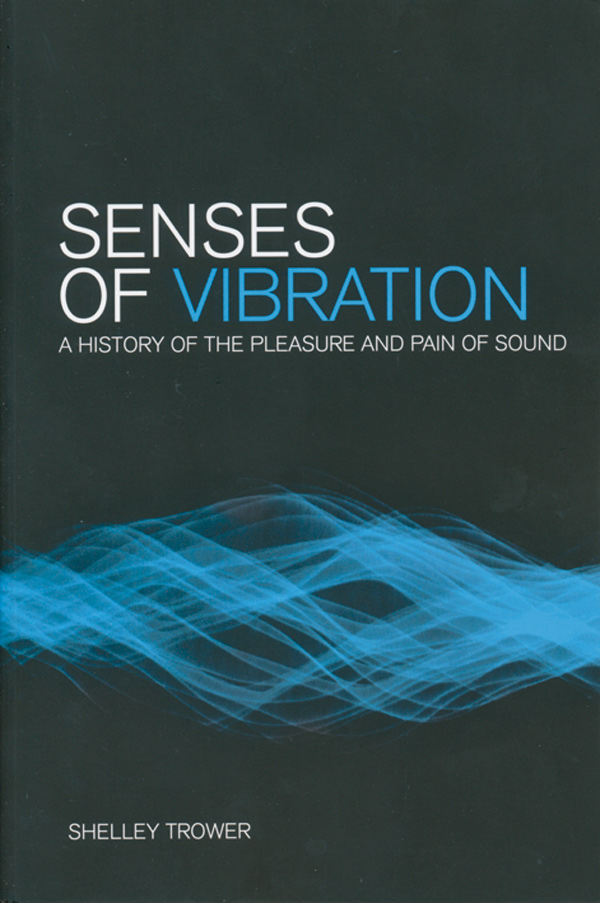 The study of the senses has become a rich topic in recent years. Senses of Vibration explores a wide range of sensory experience and makes a decisive new contribution to this growing field by focussing not simply on the senses as such, but on the material experience – vibration – that underpins them.
This is the first book to take the theme of vibration as central, offering an interdisciplinary history of the phenomenon and its reverberations in the cultural imaginary. It tracks vibration through the work of a wide range of writers, including physiologists (who thought vibrations in the nerves delivered sensations to the brain), physicists (who claimed that light, heat, electricity and other forms of energy were vibratory), spiritualists (who figured that spiritual energies also existed in vibratory form), and poets and novelists from Coleridge to Dickens and Wells. Senses of Vibration is a work of scholarship that cuts through a range of disciplines and will reverberate for many years to come.

Senses of Vibration
A History of the Pleasure and Pain of Sound
By: Shelley Trower 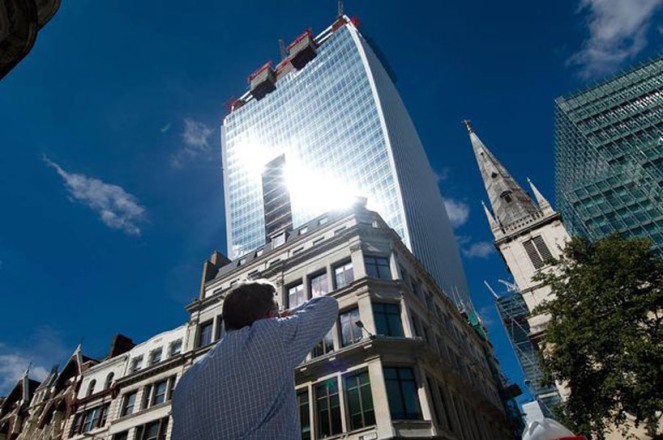 Blinding rays of light from a skyscraper in the City of London are being blamed for melting vehicles below it.

Developers of 20 Fenchurch Street, better known as the “Walkie-Talkie” because of its distinctive shape, are investigating reports of the damaging glare, and a number of nearby car parking spaces have been suspended, say reports.

Businessman Martin Lindsay said he was distraught when he returned to find his luxury Jaguar XJ saloon with warped panels along one side.

The wing mirror and badge had also melted from the heat of the reflected sunlight, he claimed.
“They’re going to have to think of something. I’m gutted. How can they let this continue?” he told City AM.

Another driver has also come forward to complain of damage to his Vauxhall Vivaro van.

Eddie Cannon, a heating and air conditioning engineer, said: “The van looks a total mess – every bit of plastic on the left hand side and everything on the dashboard has melted, including a bottle of Lucozade that looks like it has been baked.”

The 37-storey skyscraper is still under construction. On Tuesday temperatures measured in front of the building reached 33C (92F).

In a joint statement, developers Land Securities and Canary Wharf, told the newspaper: “As a precautionary measure, the City of London has agreed to suspend three parking bays in the area which may be affected.” 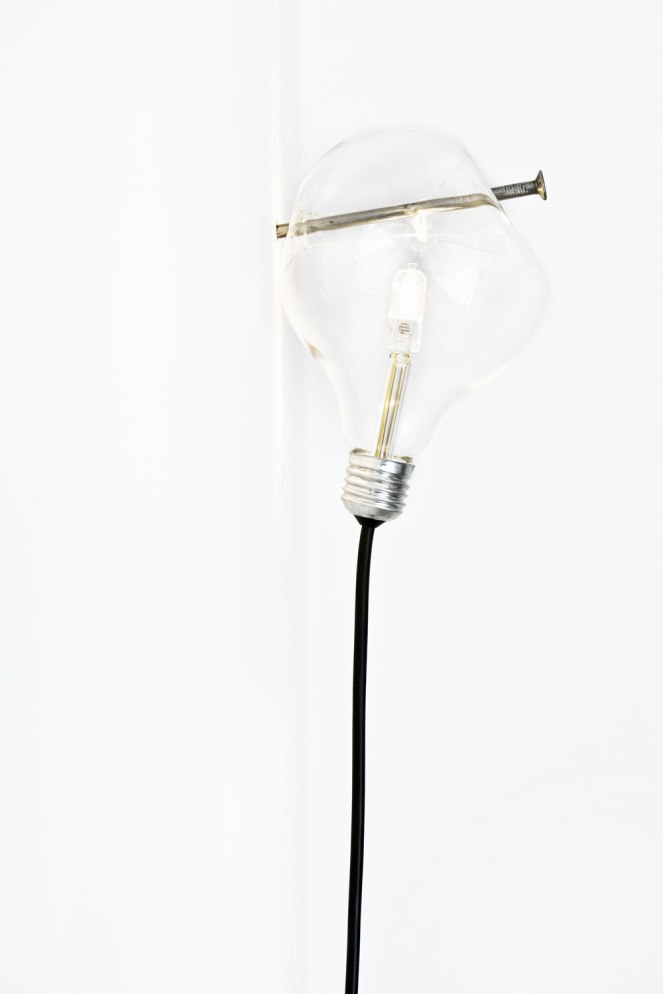 ‘Hang It On The Wall’ by designer Harry Thaler. This series of lamps respond to the phasing out of the iconic Edisson lightbulb. The shape of the lamp is an act of preservation, it retains the iconic lightbulb whilst still moving with the times. Material: borosilicate glass, halogen bulb. 2008

Light Show explores the experiential and phenomenal aspects of light by bringing together sculptures and installations that use light to sculpt and shape space in different ways. The exhibition showcases artworks created from the 1960s to the present day, including immersive environments, free-standing light sculptures and projections.

From atmospheric installations to intangible sculptures that you can move around and even through, visitors can experience light in all of its spatial and sensory forms. Individual artworks explore different aspects of light such as colour, duration, intensity and projection, as well as perceptual phenomena. They also use light to address architecture, science and film, and do so using a variety of lighting technologies.

Light Show runs at the Hayward Gallery, London, until 28 April. 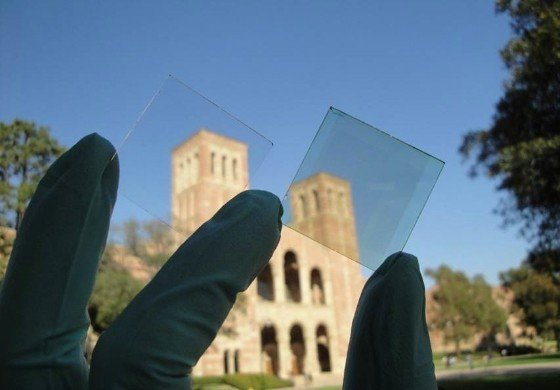 Scientists at UCLA have invented a thin, transparent solar cell that can turn the energy of the sun into electricity, while still allowing visible light to stream through it.

“If you take a piece of glass and compare it to our solar cell, it is difficult to tell the difference,” said study leader Yang Yang, a professor at UCLA and director of the Nano Renewable Energy Center at California NanoSystems Institute (CNSI).

The transparent solar cell is made out of a plastic that absorbs invisible infrared light while letting most visible light pass through.

Through a mass choreographed act of walking and endurance running, NVA’s Speed of Light will illuminate the iconic mountain, which rises dramatically from the heart of the city. A mesmerizing visual display unfolds on the ascent to the summit as hundreds of runners wearing specially commissioned light suits take to the intricate path networks below. As a member of the walking audience, you become part of the work, with portable light sources set against the dark features of the mountainside.

It is an area of science that has the power to control the human mind with the flick of a light switch.

Scientists have developed a way of using pulses of light to turn the brain cells that control our everyday actions and thoughts on or off at will. It provides a way of controlling the brain that has never been possible before.

The researchers have already conducted tests in monkeys, our closest relatives, using light to send them to sleep. They now hope to develop the techniques further for use in humans.

The technology promises to provide revolutionary new treatments for diseases that are notoriously difficult to control such as epilepsy, Alzheimer’s Disease and psychiatric illnesses. It could even help people make new memories.

Excerpt of an article written by Richard Gray, at Telegraph. Continue HERE 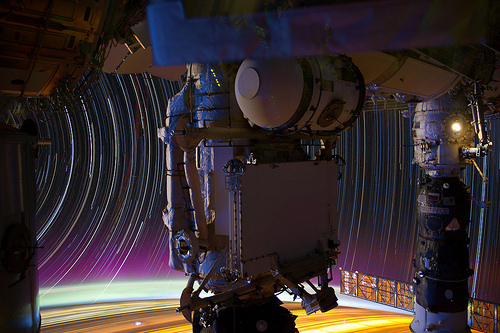 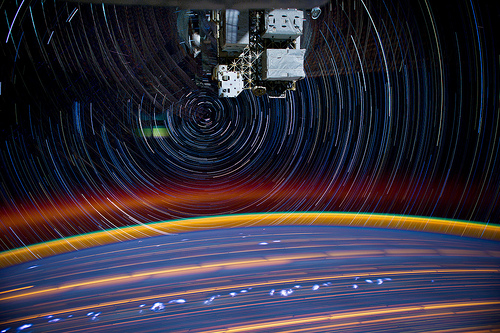 Expedition 31 Flight Engineer Don Pettit relayed some information about photographic techniques used to achieve the images: “My star trail images are made by taking a time exposure of about 10 to 15 minutes. However, with modern digital cameras, 30 seconds is about the longest exposure possible, due to electronic detector noise effectively snowing out the image. To achieve the longer exposures I do what many amateur astronomers do. I take multiple 30-second exposures, then ‘stack’ them using imaging software, thus producing the longer exposure.”

Flying high and powered only by the sun, the experimental Solar Impulse aircraft is halfway through an unprecedented intercontinental journey—without fuel tanks. The plane, shown here before a test flight last year, left Payerne, Switzerland, on May 24. Some 17 hours later, pilot André Borschberg landed successfully in Madrid, Spain.

Now, Solar Impulse is awaiting a window of good weather to complete the second leg of its journey, the approximately 20-hour flight from Madrid to Rabat, Morocco. Its planned journey over the Mediterranean Sea would place it into history books as the first manned solar flight to travel from one continent into another.

Text and Images via NatGeo 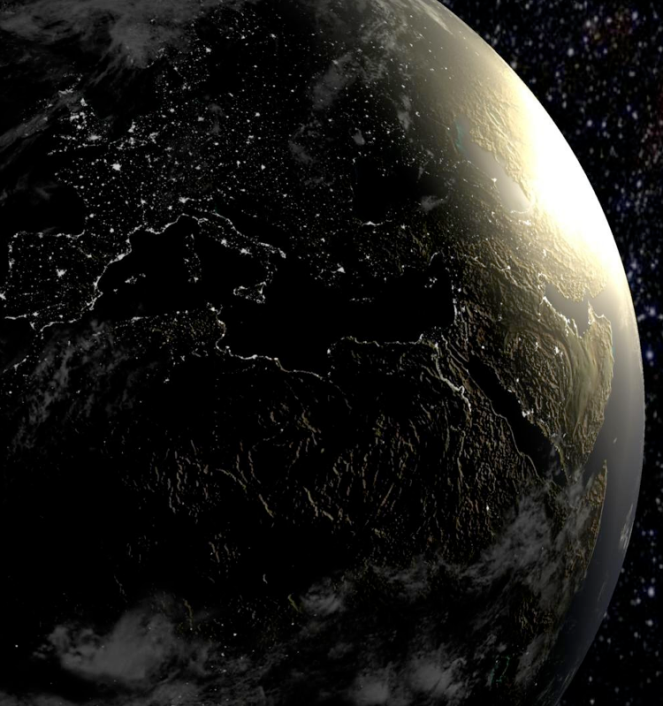 “For the sake of confusion, let’s assume that instead of just “going dark”, the Sun ceases fusion in its core at midnight tonight. This will allow for any radiation emitted to make its way out and be emitted over the next several thousand years (since energy from fusion takes a considerable amount of time to be released from the Sun).

So when does it go dark? When and how does Earth cool off? Would all life die off, and if not, who would live/die? What kills off humans, the cold? A lack of oxygen? Something else?”

Click HERE to read a series of responses posted at Quora.

Designed by Frederic Schwartz Architects, the Empty Sky 9/11 Memorial consists of twin cement and stainless steel walls, 12 feet apart, 30 feet high and 210 feet long, that reflect the changing light of day creating a halo effect at dusk and dawn as the sun hits the parallel walls. The corridor created by these two walls dramatically draws the eye to the vacant (empty) space where the towers once stood. Working with graphic designer Alexander Isley, it was decided to engrave the names of the victims in ITC Bodoni 12 in a larger size than is usual in memorials, using a cap height of 3.6 inches, spacing the names out so that none of them are broken, and allowing for the families of the victims to easily create rubbings of their names, if they so choose. Other consultants on the project include Ove Arup & Partners Structural Engineers and Arnold Associates as the landscape architects.

Text and Images via CollabCubed

Cubelets are magnetic blocks that can be snapped together to make an endless variety of robots with no programming and no wires. You can build robots that drive around on a tabletop, respond to light, sound, and temperature, and have surprisingly lifelike behavior. But instead of programming that behavior, you snap the cubelets together and watch the behavior emerge like with a flock of birds or a swarm of bees.

Each cubelet in the kit has different equipment on board and a different default behavior. There are Sense Blocks that act like our eyes and ears, Action blocks, and Think blocks. Just like with people, the senses are the inputs to the system.

Get your Cubelets HERE