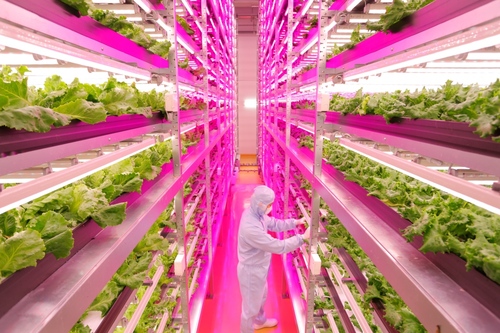 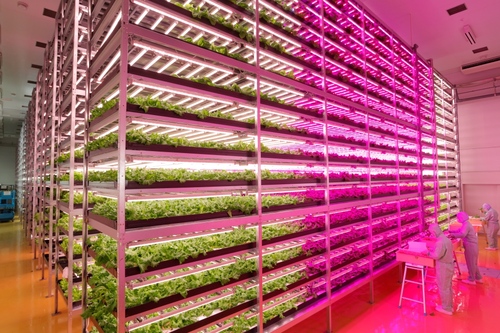 Humans have spent the last 10,000 years mastering agriculture. But a freak summer storm or bad drought can still mar many a well-planted harvest. Not anymore, says Japanese plant physiologist Shigeharu Shimamura, who has moved industrial-scale farming under the roof.

Working in Miyagi Prefecture in eastern Japan, which was badly hit by powerful earthquake and tsunamis in 2011, Shimamura turned a former Sony Corporation semiconductor factory into the world’s largest indoor farm illuminated by LEDs. The special LED fixtures were developed by GE and emit light at wavelengths optimal for plant growth.

The farm is nearly half the size of a football field (25,000 square feet). It opened on July and it is already producing 10,000 heads of lettuce per day. “I knew how to grow good vegetables biologically and I wanted to integrate that knowledge with hardware to make things happen,” Shimamura says. 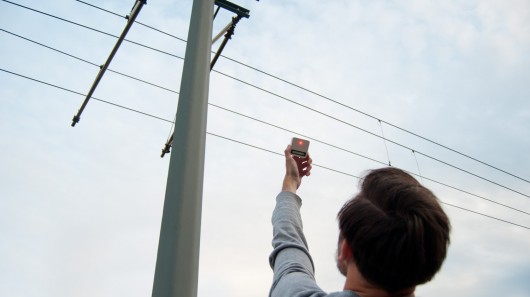 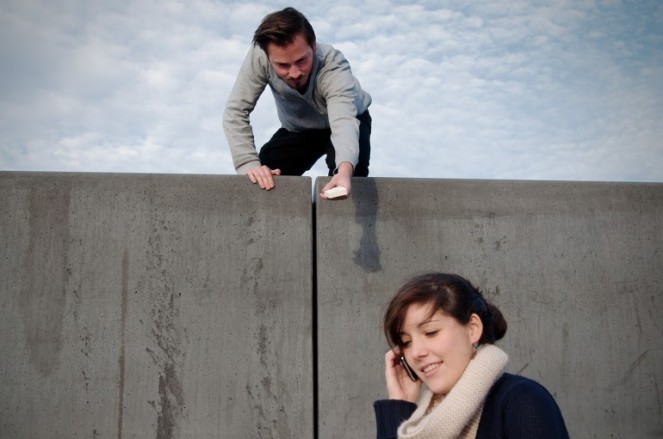 The omnipresence of electromagnetic fields is implied just by simple current flow. We are surrounded by electromagnetic fields which we are producing for information transfer or as a byproduct. Many of those fields are very capacitive and can be harvested with coils and high frequency diodes. Accordingly, I built special harvesting devices that are able to tap into several electromagnetic fields to exploit them. The energy is stored in an usual battery. So you can for example gain redundant energy from the power supply of a coffee machine, a cell phone or an overhead wire by holding the harvester directly into the electromagnetic field whose strength is indicated by a LED on the top of the harvester.

Depending on the strength of the electromagnetic field it is possible to charge a small battery within one day. The system is meant to be an option for granting access to already existing but unheeded energy sources. By exploring these sources it can create a new awareness of the invisible electromagnetic spaces while giving them a spatial dimension.

There are two types of harvester for different electromagnetic fields: a smaller harvester that is suitable for lower frequencies below 100Hz which you can find in the general mains (50/60Hz, 16,7Hz) and a bigger one that is suitable for lower and higher frequencies like radio broadcast (~100MHz), GSM (900/1800MHz) up to Bluetooth and WLAN (2,4GHz).

Text and Images via Dennis Siegel 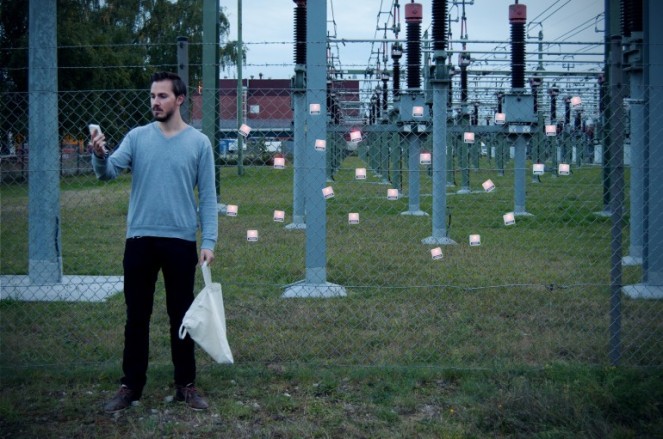 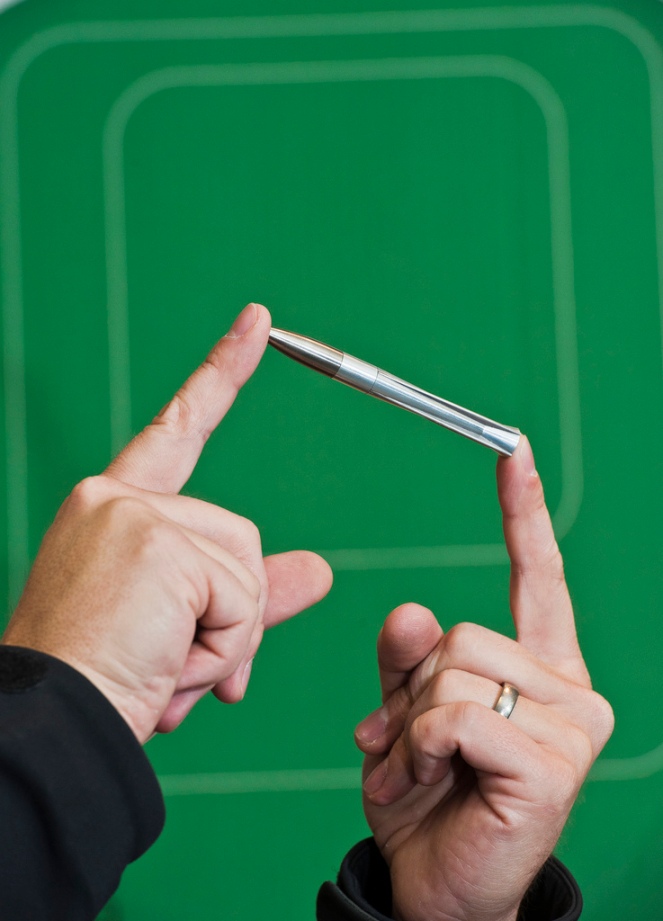 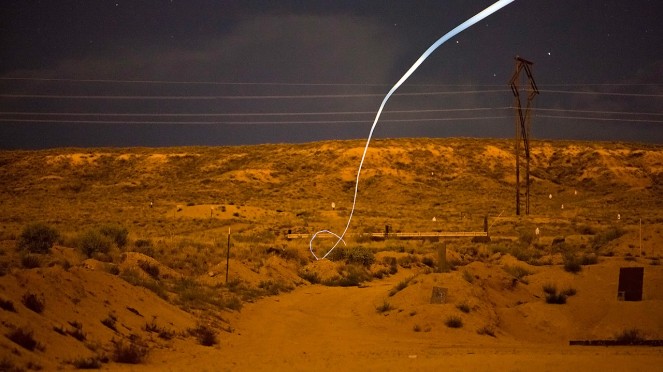 A tiny light-emitting diode, or LED, attached to a self-guided bullet at Sandia National Laboratories shows a bright path during a nighttime field test that proved the battery and electronics could survive the bullet’s launch.

Researchers have had initial success testing the design in computer simulations and in field tests of prototypes, built from commercially available parts, Jones said.

Sandia’s design for the four-inch-long bullet includes an optical sensor in the nose to detect a laser beam on a target. The sensor sends information to guidance and control electronics that use an algorithm in an eight-bit central processing unit to command electromagnetic actuators. These actuators steer tiny fins that guide the bullet to the target.

Excerpt of a press release by Sandia

Fashion photographer and filmmaker Jacob Sutton swaps the studio for the slopes of Tignes in the Rhône-Alpes region of south-eastern France, with a luminous after hours short starring Artec pro snowboarder William Hughes. The electrifying film sees Hughes light up the snow-covered French hills in a bespoke L.E.D.-enveloped suit courtesy of designer and electronics whizz John Spatcher. “I was really drawn to the idea of a lone character made of light surfing through darkness,” says Sutton of his costume choice. “I’ve always been excited by unusual ways of lighting things, so it seemed like an exciting idea to make the subject of the film the only light source.” Sutton, who has created work for the likes of Hermès, Burberry and The New York Times, spent three nights on a skidoo with his trusty Red Epic camera at temperatures of -25C to snap Hughes carving effortlessly through the deep snow, even enlisting his own father to help maintain the temperamental suit throughout the demanding shoot. “Filming in the suit was the most surreal thing I’ve done in 20 years of snowboarding,” says Hughes of the charged salopettes. “Luckily there was plenty of vin rouge to keep me warm, and Jacob’s enthusiasm kept everyone going through the cold nights.” 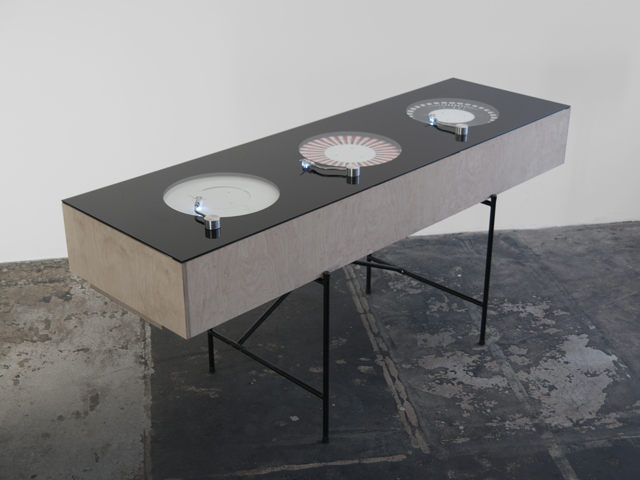 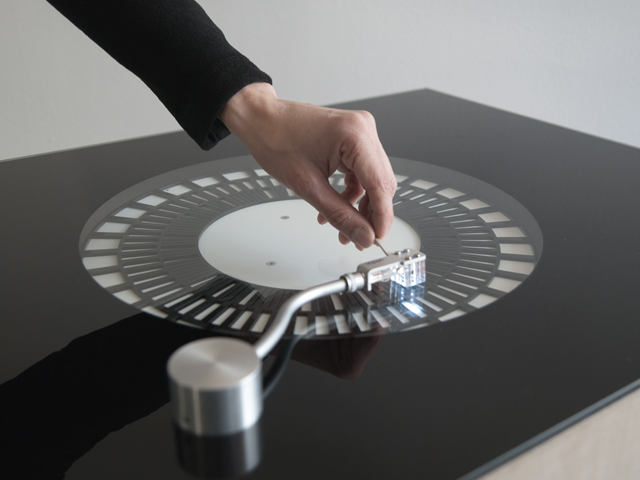 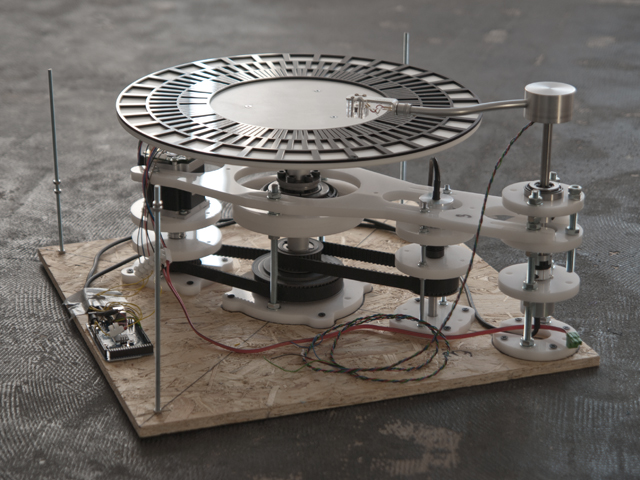 Three units, which are resembling standard record players, translate concentric visual patterns into control signals for further processing in any music software. The rotation of the discs, each holding three tracks, can be synced to a sequencer.
The Soundmachines premiered on the Volkswagen New Beetle stand at the IAA motor show in late Summer 2011. In cooperation with the sounddesigner/producer Yannick Labbé of TRICKSKI fame, we developed three unique discs, each controlling one track of an Ableton Live Set exclusively made for the Event. The show was supported by a set of realtime generated visuals, running on a 25m wide LED wall. 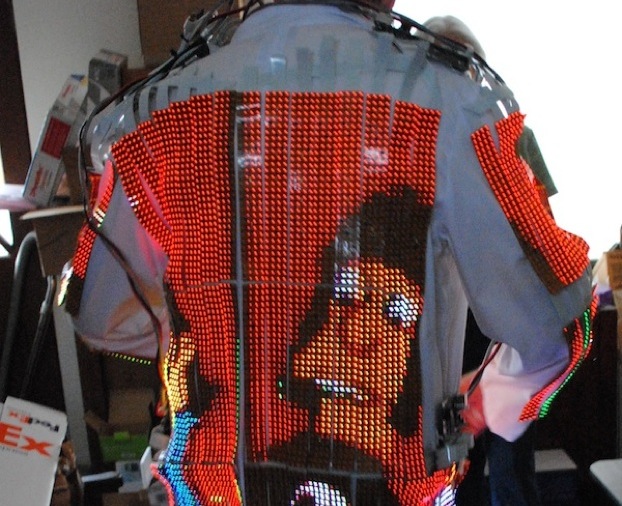 Wearable displays have been used to make a high-tech game of tag, and some have been made into tattoos. One tinkerer in Arizona decided to make one that could be worn as a jacket and show his favorite characters from The Simpsons.

David Forbes, an electrical engineer by trade, wanted to build something really cool to wear at the Burning Man festival. So he re-purposed a relatively simple flexible circuit board covered with LEDs. He made the first with 30 rows of four LEDs each and then contracted a manufacturer to build 175 more of them. He attached them to an old coat and was able to build a display with a 160 x 120 resolution, which he notes on his blog is exactly

Part of the set-up is the same kind of chip used to scale down the images for security cameras, and another is the same type of chip used to control the big LED signs used for advertisements. Adding a small set of circuits that convert the video output of the iPod to the smaller resolution, he was able to put together his wearable display.

The only down side seems to be getting through airports. Forbes also noted that he wasn’t able to create a pair of pants, as the curves over the thighs proved complicated. But he has designed vests.

If you want a coat like this it will be expensive, largely due to the cost of the LEDs. For $39,995 Forbes will make you one that is a full wrap-around display; a front-only will set you back $24,995. Wait time is about four months.

Besides creating a walking billboard one idea is to attach a camera that transmits a picture of the scene on one side of the wearer, creating a kind of optical camouflage. On the other hand, it could be great dance club wear — this might be a big seller among trance music and Daft Punk fans. Text by Jesse Emspak. Via Discovery News