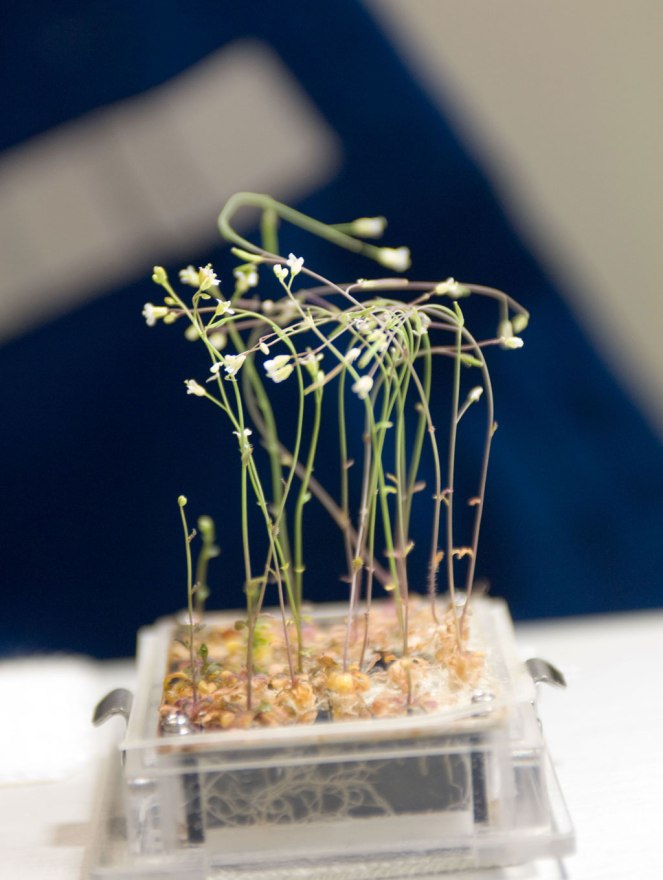 When a seed is planted in the ground, the roots tend to grow downward in search of water and nutrients. But what happens when there is no “down” for the roots to grow? Scientists sent seeds to the International Space Station and were surprised to see what plants did without gravity to guide their roots downward.

The scientists ran their experiment on Arabidopsis plants—a go-to species for plant biologists. The control group was germinated and grown at the Kennedy Space Center (A), while the comparative group was housed on the International Space Station (B). For 15 days, researchers took pictures of the plants at six-hour intervals and compared them. Their results surprised even them: the plants in space exhibited the same growth patterns as those on Earth.

The researchers were looking for two specific patterns of root growth: waving and skewing. With waving, the root tips grow back and forth, much like waves. Skewing occurs when a plant’s roots grow at an angle, rather than straight down. Scientists don’t know exactly why these root behaviors occur, but gravity was thought to be the driving force for both.

This experiment disproved the widely accepted gravity-based theory. Although the orbiting plants grew more slowly than their terrestrial counterparts, skewing showed up equally in both groups of plants. Waving was much less pronounced in the roots of the ISS plants but still present. These results [pdf] published in BMC Plant Biology last week, demonstrate that gravity is not necessarily the key component in determining a plant’s growth pattern. In fact, gravity doesn’t even seem to be necessary for these patterns to occur at all. Scientists are now looking to other forces such as moisture, nutrients, and light avoidance to explain why roots grow the way they do.

An article written by Breanna Draxler at Discover. All text and image via Discover
Top Image via Wired