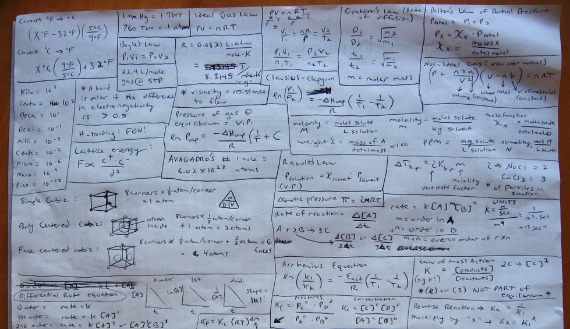 Some things are worth memorizing–addresses, PINs, your parents’ birthdays. The sine of π/2 is not among them. It’s a fact that matters only insofar as it connects to other ideas. To learn it in isolation is like learning the sentence “Hamlet kills Claudius” without the faintest idea of who either gentleman is–or, for what matter, of what “kill” means. Memorization is a frontage road: It runs parallel to the best parts of learning, never intersecting. It’s a detour around all the action, a way of knowing without learning, of answering without understanding.

Memorization has enjoyed a surge of defenders recently. They argue that memorization exercises the brain and even fuels deep insights. They say our haste to purge old-school skills-driven teaching from our schools has stranded a generation of students upriver without a paddle. They recommend new apps aiming to make drills fun instead of tedious. Most of all, they complain that rote learning has become taboo, rather than accepted as a healthy part of a balanced scholastic diet.

Excerpt from an article written by BEN ORLIN at The Atlantic. Continue THERE

Late in May, the direct-to-consumer gene-testing company 23andMe proudly announced the impending award of its first patent. The firm’s research on Parkinson’s disease, which used data from several thousand customers, had led to a patent on gene sequences that contribute to risk for the disease and might be used to predict its course. Anne Wojcicki, co-founder of the company, which is based in Mountain View, California, wrote in a blog post that the patent would help to move the work “from the realm of academic publishing to the world of impacting lives by preventing, treating or curing disease”.

Some customers were less than enthusiastic. Holly Dunsworth, for example, posted a comment two days later, asking: “When we agreed to the terms of service and then when some of us consented to participate in research, were we consenting to that research being used to patent genes? What’s the language that covers that use of our data? I can’t find it.”

The language is there, in both places. To be fair, the terms of service is a bear of a document — the kind one might quickly click past while installing software. But the consent form is compact and carefully worded, and approved by an independent review board to lay out clearly the risks and benefits of participating in research. “If 23andMe develops intellectual property and/or commercializes products or services, directly or indirectly, based on the results of this study, you will not receive any compensation,” the document reads.

Excerpt from an article written by Erika Check Hayden, at Nature. Continue HERE

“We describe an experiment to determine the effects of meditation training on the multitasking behavior of knowledge workers. Three groups each of 12-15 human resources personnel were tested: (1) those who underwent an 8-week training course on mindfulness-based meditation, (2) those who endured a wait period, were tested, and then underwent the same 8-week training, and (3) those who had 8-weeks of training in body relaxation. We found that only those trained in meditation stayed on tasks longer and made fewer task switches, as well as reporting less negative emotion after task performance, as compared with the other two groups. In addition, both the meditation and the relaxation groups showed improved memory for the tasks they performed.” (PDF)

The Occupation Directory is a public listing of all known Occupation sites built by and for the #Occupy movement. The directory aims to be a service layer upon which anyone can build other apps. All our data is FREE and PUBLIC in a variety of formats.

The directory data was instantiated from a manual merge of the data from a number of public sources from our partners and collaborators at occupytogether, wealloccupy, The Guardian, and many others.

Surveying the landscape, we saw there were many overlapping, spreadsheet-based, directory projects. We identified a need to standardize the data collected, liberate it from Google, and assist data submission and editing with form validation, editorial workflows, and community participation.

Many people constantly update about their lives on social networking sites like Facebook and Twitter mainly because of the “kicks” that self-disclosure offers, according to a new Harvard study.

The study found that sharing personal information is as good as eating food or even having sex. The nucleus accumbens (NAcc) and the ventral tegmental area (VTA), regions that are associated with reward, were active when people talked about themselves.

Reliable Internet access on the Moon, near Mars or for astronauts on a space station? How about controlling a planetary rover from a spacecraft in deep space? These are just some of the pioneering technologies that ESA is working on for future exploration missions.

What do observation or navigation satellites orbiting Earth have in common with astronauts sending images in real time from the International Space Station? They all need to send data back home. And the complexity of sharing information across space is set to grow.

In the future, rovers on Mars or inhabited bases on the Moon will be supported by orbiting satellite fleets providing data relay and navigation services. Astronauts will fly to asteroids, hundreds of millions of kilometres from Earth, and they’ll need to link up with other astronauts, control centres and sophisticated systems on their vessels.

All of these activities will need to be interconnected, networked and managed.

“The advent of the Internet, with sophisticated algorithmic search engines, has made accessing information as easy as lifting a finger. No longer do we have to make costly efforts to find the things we want. We can “Google” the old classmate, find articles online, or look up the actor who was on the tip of our tongue. The results of four studies suggest that when faced with difficult questions, people are primed to think about computers and that when people expect to have future access to information, they have lower rates of recall of the information itself and enhanced recall instead for where to access it. The Internet has become a primary form of external or transactive memory, where information is stored collectively outside ourselves.” 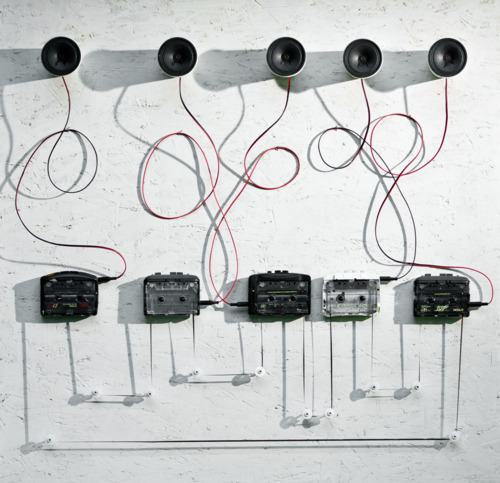 This sound installation depicts the possible problems of the flow of information. It tries to reflect the human mis-audition, the lapse of information and the social problems which derive from these. The design is clear and it has a transparent structure. Using analog technology and ignoring complicated ones are all used to strengthen the expressiveness of installation.

After turning on the Walkman the tape starts to move. Each Walkman plays the sound, which is on the tape, in a different point. However, the sound is the same the constants are chaotic. The reading points are not the same distance from each other. Some Walkmans are louder while others are quieter so the consonants are not homogeneous. If you bend closer to the Walkmans you can easily notice where they are in the course of replay.