Humans have sought immortality since at least the 22nd century B.C., if the ancient story “Epic of Gilgamesh” is any indication. And if we’re looking for biological immortality, we might have to keep looking. But if you don’t mind living a virtual life, immortality might be yours for the taking.

Our new digital lives have opened up countless ways for us to express thoughts and share ideas, particularly on social media. While you’re busy posting your latest selfie, something much more meaningful is happening. With each photo you take or message you write, technology is slowly capturing digital artifacts of your life. Artifacts that someday not too far from now might be reassembled into your virtual avatar.

Instead of flipping through photo albums, imagine if your great-grandchildren walk over to the latest voice-controlled computer of their day and say, “I want to talk to grandma.” In just seconds, a “virtual you” is projected into the room ready for a quick conversation. Your thoughts, stories, favorite phrases and even mannerisms are all correct. Sounds far-fetched, but not as much as you might think.

In fact, there are several companies who promise to collect your digital content and create a virtual you, including Eterni.me, LifeNaut and LIVESON.

If consciousness is just the workings of neurons and synapses, how do we explain the phenomenon of near-death experience? By some accounts, about 3% of the U.S. population has had one: an out-of-body experience often characterized by remarkable visions and feelings of peace and joy, all while the physical body is close to death. To skeptics, there are more plausible, natural explanations, like oxygen deprivation. Is the prospect of an existence after death “real” and provable by science, or a construct of wishful thinking about our own mortality?

The fundamental structure of human populations has changed exactly twice in evolutionary history. The second time was in the past 150 years, when the average lifespan doubled in most parts of the world. The first time was in the Paleolithic, probably around 30,000 years ago. That’s when old people were basically invented.

Throughout hominid history, it was exceedingly rare for individuals to live more than 30 years. Paleoanthropologists can examine teeth to estimate how old a hominid was when it died, based on which teeth are erupted, how worn down they are, and the amount of a tissue called dentin. Anthropologist Rachel Caspari of Central Michigan University used teeth to identify the ratio of old to young people in Australopithecenes from 3 million to 1.5 million years ago, early Homo species from 2 million to 500,000 years ago, and Neanderthals from 130,000 years ago. Old people—old here means older than 30 (sorry)—were a vanishingly small part of the population. When she looked at modern humans from the Upper Paleolithic, about 30,000 years ago, though, she found the ratio reversed—there were twice as many adults who died after age 30 as those who died young.

Excerpt from an article written by Laura Helmuth at Slate. Continue THERE 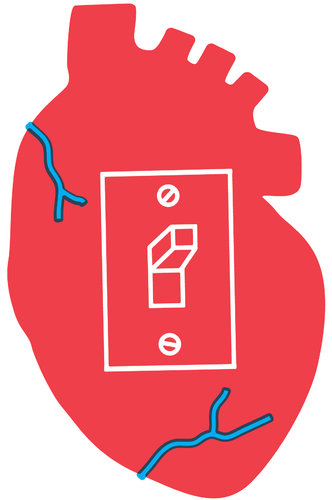 In 1968, a letter to The British Medical Journal titled “Not Allowed to Die” described the ordeal of a retired 68-year-old doctor admitted to “an overseas hospital” (almost certainly in America) with metastatic stomach cancer. After much of his stomach was surgically removed and a blood clot cleared from his lung, he asked that “no further steps be taken to prolong his life, for the pain of his cancer was now more than he would needlessly continue to endure.” Two weeks later the unfortunate doctor had a heart attack in the hospital. His heart was shocked and restarted five times in a single night; morning found him in a persistent vegetative state. His body remained alive for another three weeks.

That hellish situation, rare in the rest of the world, is all too common in this country. Although most of us claim no desire to die with a tube down our throat and on a ventilator, the fact is, as Katy Butler reminds us in “Knocking on Heaven’s Door,” a fifth of American deaths now take place in intensive care, where 10 days of futile flailing can cost as much as $323,000, as it did for one California man.

Butler’s introduction to the surreal world of health “care” at the end of life was precipitated by the sudden illness of her father, a native of South Africa. Jeffrey Butler lost his arm while serving in World War II. He married, earned a Ph.D. from Oxford and settled into academic life in the United States. He was a charismatic father, the sort who would “stand in our bedroom doorways and say good night to my two brothers and me quoting Horatio’s farewell to the dying Hamlet: ‘May flights of angels sing thee to thy rest!’ ” At 79 he was active and enjoying retirement when he suffered a stroke. Soon after hospitalization a “discharge planner” told the family that Jeffrey had to be immediately transferred to a neurological rehabilitation facility. “Only later would I understand the rush,” Butler writes. “The hospital was losing money on him with every passing day. Out of $20,228 in services performed and billed, Medicare would reimburse Middlesex Memorial only $6,559, a lump sum based on the severity of my father’s stroke diagnosis.”

Excerpt from an article written by ABRAHAM VERGHESE at the NYT. Continue THERE

Scout motto is “be prepared,” but it’s hard to be prepared for death, be it our own or a loved one’s. Too much is unknown about what dying feels like or what, if anything, happens after you die to ever feel truly ready. However, we do know a bit about the process that occurs in the days and hours leading up to a natural death, and knowing what’s going on may be helpful in a loved one’s last moments.

During the dying process, the body’s systems shut down. The dying person has less energy and begins to sleep more and more. The body is conserving the little energy it has, and as a result, needs less nourishment and sustenance. In the days (or sometimes weeks) before death, people eat and drink less. They may lose all interest in food and drink, and you shouldn’t force them to eat. In fact, pushing food or drink on a dying person could cause him or her to choke — at this point, it has become difficult to swallow and the mouth is very dry.

As the person takes in less food and drink, he or she will urinate less frequently and have fewer bowel movements. The person may also experience loss of bladder and bowel control. People who are dying may become confused, agitated or restless, which could be a result of the brain receiving less oxygen. It can be disconcerting and painful to hear a loved one so confused in his or her last days.

The skin will also show the effects of slowing circulation and less oxygen — the extremities, and later, the entire body, may be cool to the touch and may turn blue or light gray. Some skin may exhibit signs of mottling, which is reddish-blue blotchiness. As the person gets closer to death, it will become harder and harder to breathe. Respiration will be noisy and irregular; it will sometimes seem as if the person can’t breathe at all. When there’s fluid in the lungs, it can cause a sound known as the death rattle. It may be possible to alleviate the gurgling and congestion by raising the person’s head. If the dying person is experiencing pain, he or she will usually be given medications to manage it.

When we’re watching someone die, we may have a preconceived notion of how the person should handle death emotionally and spiritually. It’s important to remember that every person experiences dying differently. Some people have the need to say goodbye or to hear from another person before death, some don’t. Some people prefer to partake in religious rites, while others may remain silent until the end and pass away when everyone has left the room. Doctors and other professionals who manage end-of-life care advise loved ones to take their cues from the dying and avoid projecting their own desires or needs onto the person. They also urge loved ones to continue speaking comfortingly to a dying person — hearing may be one of the last things to go.

All Text via How Stuff Works. See Experiencing Death video THERE

When I think of funeral homes I think of muted colors like blacks, whites and greys. And indeed, funerals in Japan are largely a black & white affair, with any deviation from the code being considered taboo and disrespectful. So when Tokyo-based ad agency I&S BBDO was approached by Nishinihon Tenrei to create an unconventional ad for funeral services, it understandably posed several challenges.

“The March 11th earthquake and tsunami had a traumatic effect on Japan. Issues of life and death, hope and despair, beauty and tragedy became an all too real part of people’s everyday lives,” says the agency, reflecting on how to communicate the funeral home’s new role of remembering and celebrating the beauty of a lost person’s life.

Creative director Mari Nishimura decided to create a real-size human skeleton made from pressed flowers. The striking image is both beautiful, as well as celebratory, expressing through flowers what remains after death. Text and Image via Spoon & Tamago

During the early nineties, Lucinda Devlin systematically took photographs of gas chambers, injection rooms, electric chairs and death cells in rural towns and cities in the United States. She entitled the series “Omega Suites” — alluding to the final letter of the Greek alphabet as a metaphor for the end. Seemingly an examination of the death penalty, her austere, haunting images are actually metaphors that question the culture in America, where 70 percent of citizens support the death penalty. More than 3000 Americans have been sentenced to death and are in final holding cells, where they wait an average of 10 years before being executed.
In Lucinda Devlin’s photographs, the death cell represents aspects of American society and its accompanying mentality. One image shows an electric chair in the bright yellow color of American school buses which prison officers named “Yellow Mama”. Wooden paneling and carpets lend an almost cozy atmosphere to the setting. Another electric chair placed in the center of a room represents the character of a throne amid emptiness and clinical sterility. Elsewhere, the somber cross-like stretcher used for lethal injections suggests that executions are religious rituals, replete with a celebratory audience (seated on chairs opposite).
Icy and compelling, the photographs present a clearly defined and hermetically sealed concept of the world which is characterized by taking extreme measures against the ominous — instead of attempting integration. They do so in a precise, exquisite and seductive way while intellectually repelling us.

Text via HERE. Images via HERE, HERE, and HERE. 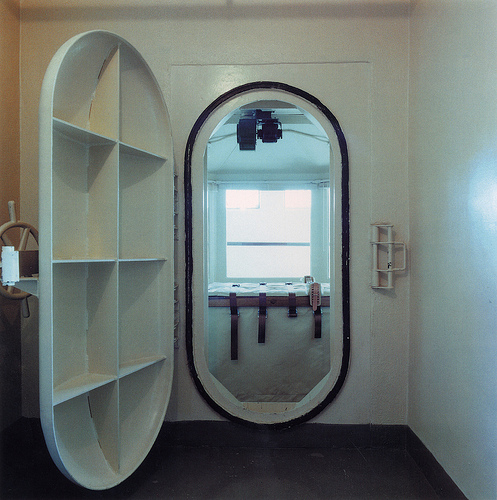 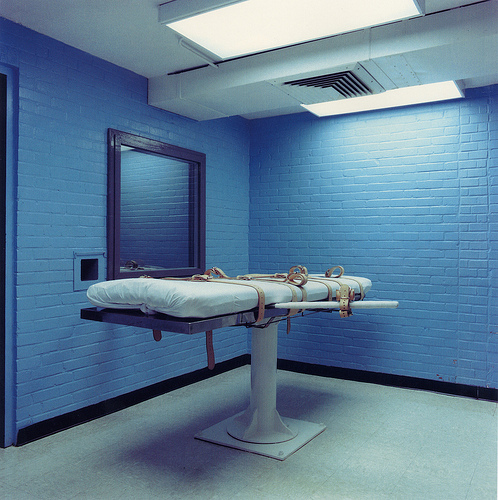