The Residencia is a hotel for staff and guests at the European Southern Observatory’s Paranal Observatory in northern Chile. Located in an extremely remote and desolate section of the Atacama desert, the Residencia was designed by the German architecture firm Auer + Weber as a sanctuary in an environment that has never supported life. The L-shaped building was dug into the ground as if to conceal its presence, presenting profoundly different faces depending on the approach. From the road entrance out front the Residencia is practically invisible; from the observatory on the mountain’s top all that’s seen is the skylight dome. And from the open desert the building could be a mirage: a long, flat brick wedged between two hills like a step into the star-filled sky.

Text and Video via Tramnesia 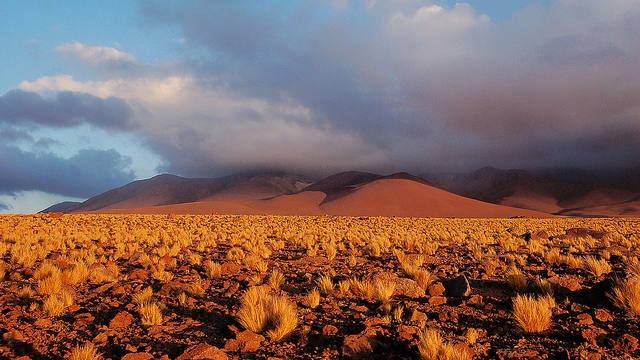 The unimaginably arid conditions of South America’s Atacama Desert have mad it the perfect scientific stand-in for Mars. So in a place that is quite literally almost alien, it makes sense we’d find microbes as strange as these.

Specifically, researchers have found microbes inside some of the region’s volcanoes, which are incredibly dry even by the already ludicrous standards of the Atacama. Fungi and bacteria have been found in the recently collected soil samples, but of greatest interest are the least complex of the organisms, the archaea. Those found in the Atacama volcanoes seem to have evolved a way of converting energy – one of the most basic processes an organism undertakes – in a way unlike any other known species.

Excerpt of an article written by Alasdair Wilkins, at io9. Continue HERE