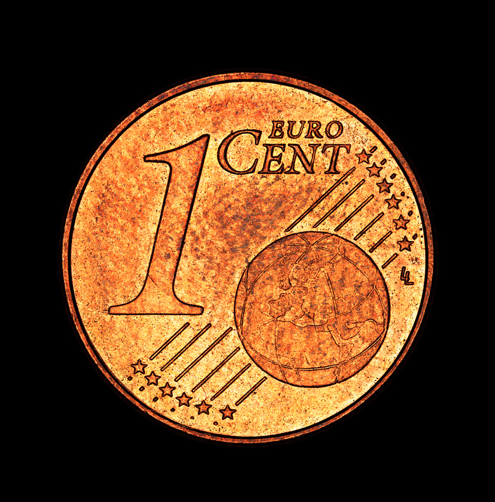 The lowest domination coin from each of the world’s currencies imaged by the Advanced Engineered Materials Group at the National Physical Laboratory, using an Alicona infinite focus 3D optical microscope. These are small low resolution versions from orginals containing over 400 million pixels.

“The economic system, which has raised to such notorious prominence in recent years because of its obvious impact on our lives, is a complex structure whose functioning is increasingly necessary to understand and, as much as possible, to predict or even control. In this sense, and in response to the dominance of macroeconomics in the discourse of the media, the artist chooses a microscopic view of the world economy. The Fundamental Units, a series that begins with the works produced by Horrach Moyà Gallery for this exhibition, is an exploration of the lowest denomination coins from the world’s currencies using an infinite focus 3D optical microscope at the National Physical Laboratory in Teddington (UK). The images obtained with the microscope have been combined to form an extremely detailed large scale reproduction of the least valuable coins from Australia, Chile, the Euro, Myanmar and the Kingdom of Swaziland. In these images the humble metal acquires a planetary dimension and is displayed as the atoms that shape the global economy”. – Pau Waelder, Curator

Text and Image via The Fundamental Units