With millions of tons of garbage dumped into the oceans annually and repeat incidence of oil spills like the Deepwater Horizon Disaster, it’s the Ocean which has taken the brunt of unsustainable methods from man. In effect, it’s estimated almost 100,000 marine animals are killed due to debris entanglement and continually rising pollution.

To a degree, individual lessening of consumerism and utilizing sustainable methods to re-use and eliminate waste is very beneficial. However, reducing the already-toxic state of the Earth is the biggest concern of environmentalists and engineers, seeking to utilize the technological advances already available. To this avail, it was 19-year-young Boyan Slat that ingeniously created the Ocean Array Plan, a project that could remove 7,250,000 tons of plastic from the world’s oceans in just five years.

Slat’s idea consists of an anchored network of floating booms and processing platforms that could be dispatched to garbage patches around the world. Working with the flow of nature, his solution to the problematic shifting of trash is to have the array span the radius of a garbage patch, acting as a giant funnel as the ocean moves through it. The angle of the booms would force plastic in the direction of the platforms, where it would be separated from smaller forms, such as plankton, and be filtered and stored for recycling. The issue of by-catches, killing life forms in the procedure of cleaning trash, can be virtually eliminated by using booms instead of nets and it will result in a larger areas covered. Because of trash’s density compared to larger sea animals, the use of booms will allow creatures to swim under the booms unaffected, reducing wildlife death substantially.

Excerpt from an article written by Amanda Froelich at True Activist. Continue THERE 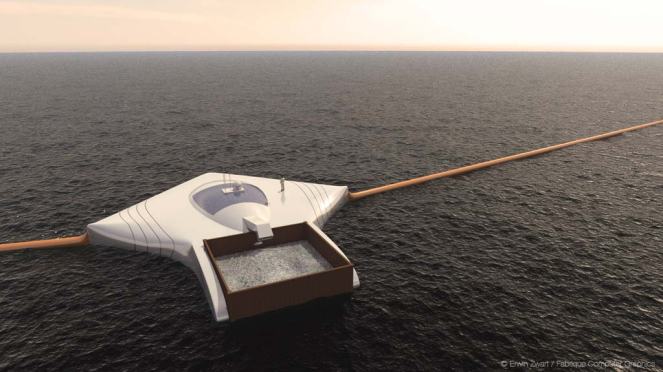