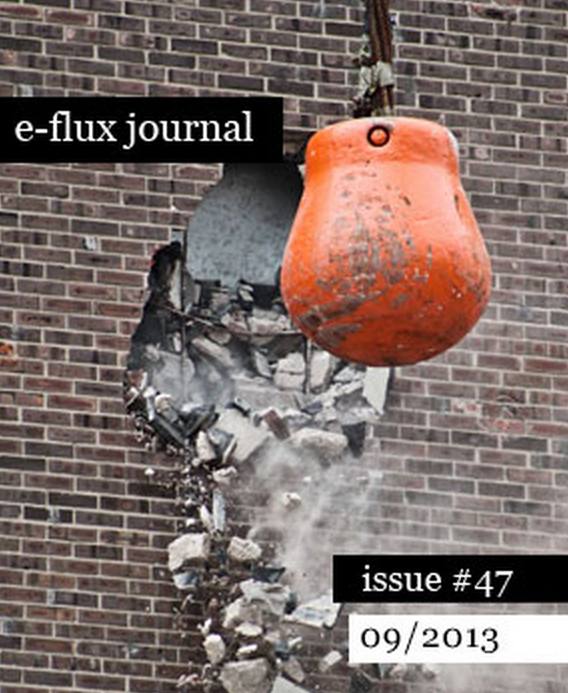 Boris Groys
Becoming Revolutionary: On Kazimir Malevich
After all, what is revolution? It is not the process of building a new society—this is the goal of the post-revolutionary period. Rather, revolution is the radical destruction of the existing society. However, to accept this revolutionary destruction is not an easy psychological operation. We tend to resist the radical forces of destruction, we tend to be compassionate and nostalgic toward our past—and maybe even more so toward our endangered present.

Nato Thompson
The Insurgents, Part I: Community-Based Practice as Military Methodology
The US military is seductive and repulsive in its grandiose violence. But it is also a fruitful place to examine developing techniques for the manipulation of culture. Considering the sheer scale of the US military—with its colossal budget—it’s not a bad place to look for new ideas and new methodologies concerning tactics for “getting to know people.”

Amanda Boetzkes and Andrew Pendakis
Visions of Eternity: Plastic and the Ontology of Oil
If plastic appears irreducible—appears to be a constitutive basis, instead of having emerged from and subsequently effaced its earthly basis—then the challenge is to uncover what plastic so readily disguises. Plastic is a petroleum product that claims at least a quarter of all the oil extracted. More than this, though, it is through plastics that we begin to fathom the complete permeation of oil into every facet of cultural life.

Jon Rich
The Bachelor Century: Single Sinners Seeking God’s Job
A soldier in the battlefield kills indiscriminately—gunfire and stabbings directed at whomever happens to be present. In contrast, the target of the bomb in Hiroshima is entirely ethnic, akin to the way Abu Musab Al-Zarqawi’s chose his victims. It is a crime against the human race, or a part of that race, because the bomb acts without regard for the political views of its victims. To be murdered because you are American, or Japanese, or Kurdish, or Christian, or Muslim is fundamentally different from being targeted because you are a soldier.

Claire Fontaine
We Are All Clitoridian Women: Notes on Carla Lonzi’s Legacy
In the Italian feminist ultra-left of Lonzi’s time, a deep connection between knowledge of oneself—especially of one’s own pleasure—and satisfaction was regarded as the only way to reach autonomy. There was a vivid awareness that colonization operates through the mind and the body, and the only way to reach freedom was working on one’s own subjectivity.

Lars Bang Larsen
The Society Without Qualities
Money is the one thing that connects us and that we cannot truly have in common. In societies without qualities we can, in theory, have any number of things in common. However, after the decline of symbolic orders, it is an enormous effort to call them up and give them words and form. Remember, this is the desert of the real … So never mind good intentions, they won’t get us anywhere: when art addresses the future in (self-)skeptical ways, it refuses nostalgia and hope as sentimental compensations for an uncertain future.