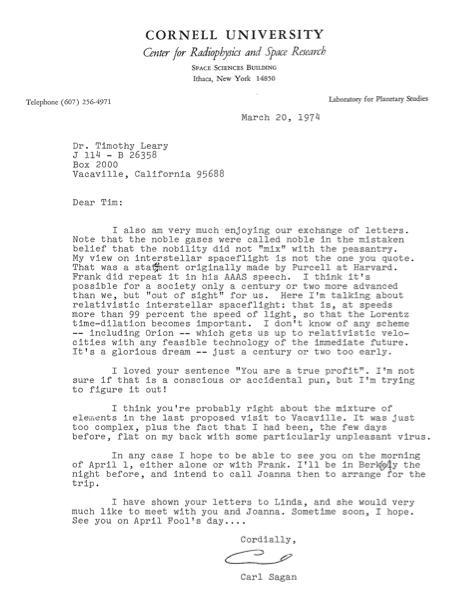 Carl Sagan, advocate of space travel and extra-terrestrial communication, visited Timothy Leary in the California Medical Facility, a state prison in Vacaville, California. Two letters from Sagan in the Leary Archives, from February and March of 1974, confirm this. Their tone is very friendly and enthusiastic. Sagan was clearly as eager for the visit as Tim most surely would have been. Similarities between Leary and Sagan abound. They were both scientific explorers and political activists – men of ideas and action. They were geniuses at communication, not only in their books and talks, but as showmen, with extraordinary abilities for communicating their theories and beliefs to a mass audience. Tim, with psychedelic theatrical events and multimedia lecture tours in a variety of venues, and Carl, with his hugely successful television show (Cosmos) and NASA projects. They were prolific writers. Both knew how to use the media to illuminate big ideas about inner space (Tim) and outer space (Carl).

Thanks for your last note and the book TERRA II. I have no problems on chance mutations and natural selection as the working material for the evolutionary process. In fact, with what we now know about molecular biology, I see no way to avoid it. But I loved your remark about the “transgalactic gardening club.” Of course, if extraterrestrials are powerful enough, they can do anything, but I don’t think we can yet count on it. I’m enclosing an article on “Life” that I did for the Encyclopaedia Britannica which you might like.

On the basic requirements for interstellar exploration, I doubt if a manned expedition to Mars could be done within the next 25 years for less than $300 billion. Try really costing your spacecraft and see what it would cost. In fact, maybe the reason we haven’t been visited is that interstellar spaceflight, while technically possible, would beggar any planet which attempted it.

If we can do it, how would you like a visit from us in the last week in February? I have no idea what the visiting privileges are, but if your and my schedules permit, Linda and I would love to visit you in Vacaville on the morning of Thursday, February 28. Frank Drake has also expressed an interest in such a visit, as has our mutual acquaintance, Norman Zinberg of Harvard Medical School. What’s your feeling about it? Write to me at the St. Francis Hotel, San Francisco, where I’ll be staying beginning Sunday, February 24, and I’ll try to firm up the visit, if it seems possible, shortly thereafter.

P.S. The enclosed poem, “The Other Night” by Dianne Ackermann of Cornell, is something I think we both resonate to. It’s unfinished so it shouldn’t yet be quoted publically.

“The Other Night (Comet Kohoutek)”:

Last night, while
cabbage stuffed with
brown sugar, meat and
raisins was baking in the
oven, and my potted holly,
dying leafmeal from red-spider,
basked in its antidote malathion,
I stepped outside to watch Kohoutek
passing its dromedary core through the
eye of a galaxy. But only found a white
blur cat-napping under Venus: gauzy, dis-
solute, and bobtailed as a Manx.

Pent-up in that endless coliseum of stars,
the moon was fuller than any Protestant
had a right to be. And I said: Moon,
if you’ve got any pull up there, bring me
a sun-grazing comet, its long hair swept
back by the solar wind, in its mouth a dollop
of primordial sputum. A dozing iceberg,
in whose coma ur-elements collide. Bring me
a mojo that’s both relict and reliquary.
Give me a thrill from that petrified seed.

Mars was a stoplight in the north sky,
the only real meat on the night’s black
bones. And I said: Mars, why be parsimonious?
You’ve got a million tricks stashed
in your orbital backhills: chicory suns
bobbing in viridian lagoons; quasars dwindling
near the speed of light; pinwheel, dumbbell,
and impacted galaxies; epileptic nuclei
a mile long; vampiric moons; dicotyledon suns;
whorling dustbowls of umbilical snow; milky ways
that, on the slant, look like freshly fed pythons.

This poem was included, along with fourteen others, in Diane Ackerman’s 1976 poetry anthology The Planets: A Cosmic Pastoral. Text and Images by The Timothy Leary Archives 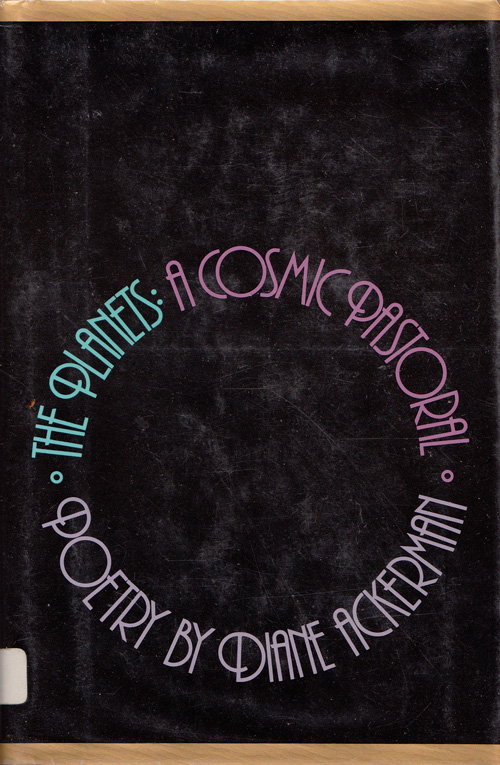 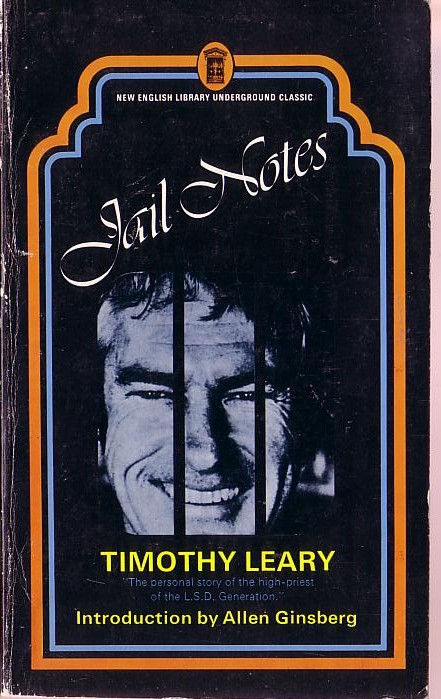