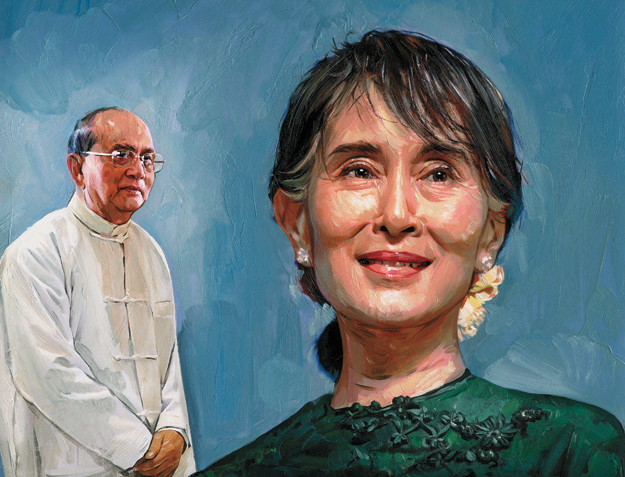 No. 1: AUNG SAN SUU KYI, THEIN SEIN – For showing that change can happen anywhere, even in one of the world’s most repressive states. Member of parliament, president | Burma

In 2012, the hopes for the Arab Spring began fading into cynicism as the world watched Syria descend into civil war, while the region’s nascent democracies struggled with their newfound freedom. But, meanwhile, one of the most remarkable and unexpected political reversals of our time has unfolded on the other side of the globe: Burma, long among the world’s most repressive dictatorships, began to reform under the leadership of two very unlikely allies.

For nearly 20 years, dissident Aung San Suu Kyi was sealed under house arrest by Burma’s paranoid military junta, which had drawn an iron curtain over the country since 1962. Now she’s a duly elected member of the country’s parliament — and it’s partly thanks to reformist President Thein Sein, a former general often described as an awkward, bookish bureaucrat. To the astonishment of many, Thein Sein began loosening restrictions on free speech and opening the economy after coming to power in 2011. This year, as the United States restored diplomatic ties with Burma (which the junta renamed Myanmar in 1989) and eased travel and economic sanctions, his government curbed censorship of the media and freed hundreds of political prisoners.