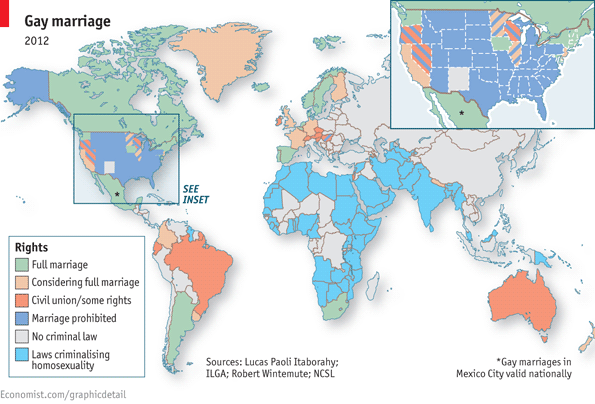 JUST 12 years after the Netherlands became the world’s first country to legalize gay nuptials, the global trend toward giving homosexuals full marriage rights seems to have gained unstoppable momentum. Same-sex marriage is now legal nationwide in 11 countries, including Argentina and South Africa, as well as in parts of a further two. In Mexico it is allowed in the capital. In America nine states and the District of Columbia have legalized it, including three which, for the first time, did so by popular vote on November 6th, ending a succession of electoral defeats for the measure in 32 states. In Catholic France the new Socialist government has just approved a bill to permit same-sex marriage. That said, in 78 countries—mostly in the Muslim world, Africa and other developing states—gay sex is still a crime, punishable by long prison terms and even death. Opposition to gay marriage remains fierce. But attitudes are changing—and fast. Britain decriminalised homosexuality only in 1967 and it was not until 2003 that America’s Supreme Court struck down the remaining sodomy laws in 14 states. Now, across most of the West, polls show a majority of public opinion in favour of equality for gays, including allowing them to marry and adopt children. And as attitudes have shifted, laws have changed.

Text and Image via The Economist