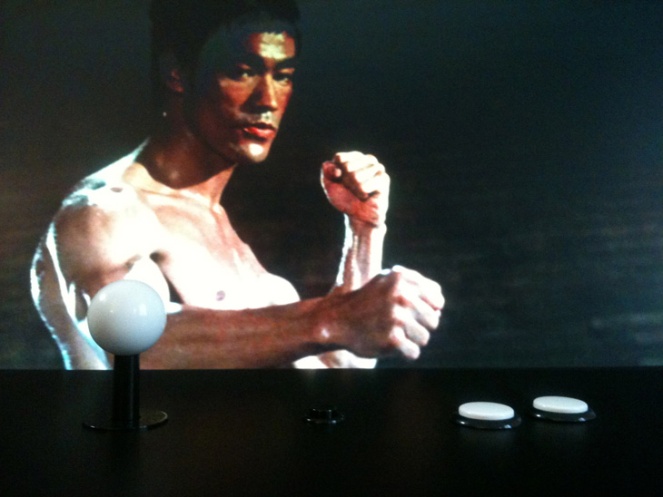 Somewhere between film and video-game, in the interactive installation Hold On, you can go your way through famous movie’s sequences like those from The Shining, Way of the Dragon or Jurassic Park.
Thanks to an arcade-type device, you can choose and control sequences from those video-ludic style movies. Paradoxically using both the very contemporary interactivity process and the old recording practice, the spectator can control the movements of the main actor turned into an avatar. The spectator can break the logical rhythm of the movie and lengthens the action using his joystick. He can delay the inescapable course of the sequence unit its end, both playing with and against time.
When machinimas are currently exploring video games to reproduce cinematics, Hold On, on the contrary, develops a playful and dynamic experience based on cinema. 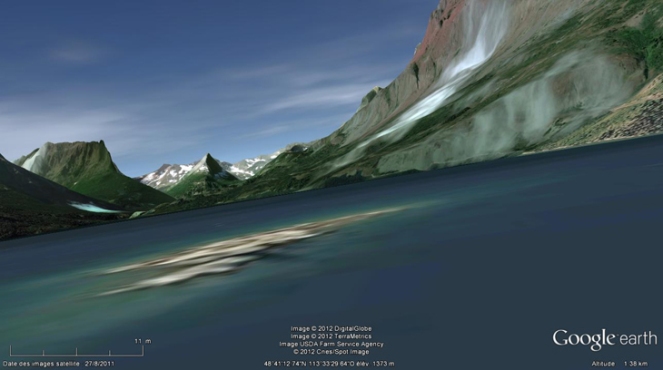 Google Earth Movies project consists in a series of interactive adaptations of emblematic sequences extracted from famous movies, recreated and played in Google Earth. In this visualization software, which allows exploring the 3D world from many satellite sources – topographical and weather satellites – the original video camera movements are precisely transcribed in the original filming location and with the original soundtrack synchronized. Moreover, the software being interactive, a joystick may be used to manipulate the camera during the reading to observe the whole screen out landscape. Thus, it is a striking cinematographic experience that is given to us: the “objectivation” operated by Google Earth, presenting ghostly worlds emptied from any characters, allows to be focused on the framing and the editing of these well-known movies haunting our imagination. Putting these narrative sequences back in context establishes a true bridge between these cinematographic, physical and virtual spaces. The spectator is freed from the frame and from the territory; he is given a new space of time, a sort of intimate screen out, interrogating its link to the real and to fiction.

All the works above by Émilie Brout & Maxime Marion. Text and Images taken from their website.