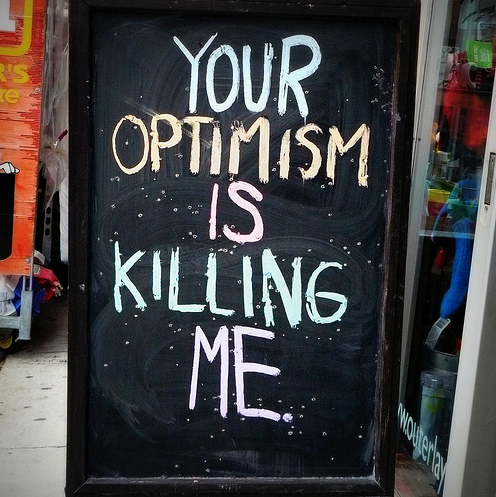 If ignorance is bliss, then optimism must be euphoria. Thanks to a mechanism called the optimism bias, humans are pretty much incapable of applying basic risk statistics to their own lives. We know smoking causes cancer, but we don’t expect it to happen to us. We find a lump on our body and we tell ourselves it’s probably nothing.

Although the term optimism bias was first used in the 1980’s, psychologist and Nobel Prize winner Daniel Kahneman was most likely the one who made it part of general vocabulary. In his 2011 book “Thinking, Fast and Slow”, Kahneman notes that “people tend to be overly optimistic about their relative standing on any activity in which they do moderately well.” The optimism bias generates the illusion of control: the idea that we are in control of our lives. Bad things only happen to others.

You can see where this bright outlook on life can cause trouble. Wearing seatbelts? Not necessary. Opening a savings account? Maybe later. Being overly optimistic in life puts us at risk. In addition, people who show cheerful, optimistic personality traits during childhood, have a shorter life expectancy than their more serious counter parts. On the other hand, optimists are more psychologically resilient, have stronger immune systems, and live longer on average than more reality-based opposites. So who’s better off in life; the optimist or the pessimist? And who’s reality comes closest to the truth?

The Positive Power of Negative Thinking