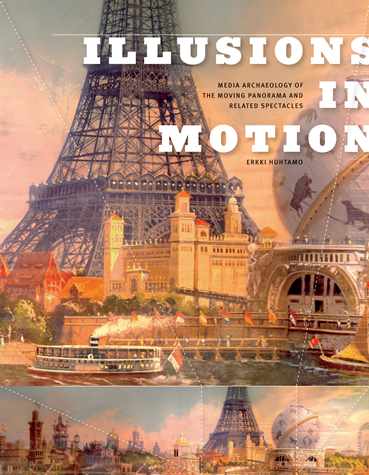 Beginning in the late eighteenth century, huge circular panoramas presented their audiences with resplendent representations that ranged from historic battles to exotic locations. Such panoramas were immersive but static. There were other panoramas that moved–hundreds, and probably thousands of them. Their history has been largely forgotten. In Illusions in Motion, Erkki Huhtamo excavates this neglected early manifestation of media culture in the making. The moving panorama was a long painting that unscrolled behind a “window” by means of a mechanical cranking system, accompanied by a lecture, music, and sometimes sound and light effects. Showmen exhibited such panoramas in venues that ranged from opera houses to church halls, creating a market for mediated realities in both city and country.

In the first history of this phenomenon, Huhtamo analyzes the moving panorama in all its complexity, investigating its relationship to other media and its role in the culture of its time. In his telling, the panorama becomes a window for observing media in operation. Huhtamo explores such topics as cultural forms that anticipated the moving panorama; theatrical panoramas; the diorama; the “panoramania” of the 1850s and the career of Albert Smith, the most successful showman of that era; competition with magic lantern shows; the final flowering of the panorama in the late nineteenth century; and the panorama’s afterlife as a topos, traced through its evocation in literature, journalism, science, philosophy, and propaganda.

Erkki Huhtamo, media historian and pioneering media archaeologist, is Professor in the Department of Design Media Arts at the University of California, Los Angeles. He is the coeditor of Media Archaeology: Approaches, Applications, and Implications.

Text and Image via MIT PRESS