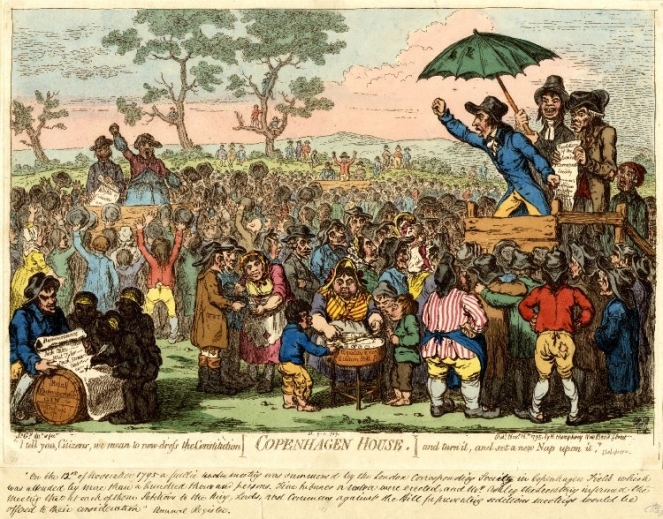 This essay examines the role of loyalist visual satire in the making and shaping of political notoriety during the period 1795-1825. Its subject is John Thelwall, the first non-elite English radical to be caricatured with reference to a recognizable physiognomy in the 1790s and, by contemporary reputation at least, the most influential and politically dangerous of the English Jacobins. It will be argued that Thelwall presented loyalist caricature with a particular set of problems.

In the years following his acquittal for High Treason in 1794, John Thelwall came to personify all that English loyalists most feared about the plebeian democrats of the London Corresponding Society. In loyalist discourse, he became at one and the same time, an intemperate but horribly effective Jacobin orator, and a covert conspirator working quietly behind the scenes to ally the Foxite opposition with the LCS and some of its insurrectionary fellow travelers. The apparent disjuncture in Thelwall’s character between public bluster and private plotting presented a unique set of problems for loyalist caricature, explicitly demonstrated in the practice of the best known ministerial cartoonists of the period, Rowlandson, Cruikshank and Gillray. This essay explores some of the ways in which this dichotomy was resolved in visual culture, and assesses the impact of popular prints like these on the manufacturing of Thelwall’s political reputation.

Excerpt from an essay by Steve Poole. Continue HERE