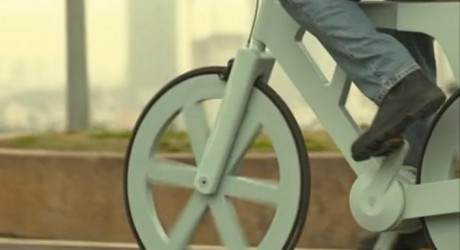 They are made of recycled cardboard, can withstand water and humidity, cost nearly nothing – and might the concept of green vehicle. Izhar Gafni is a Kibbutz resident, who decided to prove to his fellow engineers that he could make a bicycle at nearly no cost.

“They said it was impossible”

Izhar Gafni, originally from Kibbutz Bror Hayil in the Negev, took the most popular and widely sold vehicle in the community and decided to turn it into an entirely green private venture.

Gafni’s bicycle redefines the idea of green transportation in every way, being environmentally friendly from early stages of production all the way through creation of the final product. The bicycles are made out of recycled and used cardboard.

Text and Image via No Camels