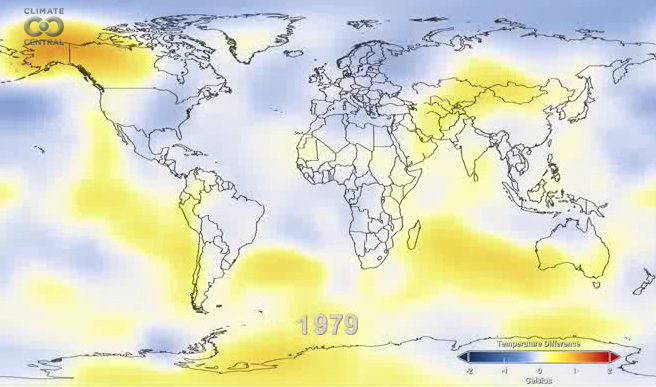 Since we launched this video in late January, more than 250,000 people have watched it as it has bounced around the digital globe. The video, which comes to us from our friends at NASA, is an amazing 26-second animation depicting how temperatures around the globe have warmed since 1880. That year is what scientists call the beginning of the “modern record.” You’ll note an acceleration of those temperatures in the late 1970s as greenhouse gas emissions from energy production increased worldwide and clean air laws reduced emissions of pollutants that had a cooling effect on the climate, and thus were masking some of the global warming signal. The data comes from NASA’s Goddard Institute for Space Studies in New York, which monitors global surface temperatures. As NASA notes, “in this animation, reds indicate temperatures higher than the average during a baseline period of 1951-1980, while blues indicate lower temperatures than the baseline average.”

One thought on “131 Years of Global Warming in 26 Seconds”