ANCIENT HISTORY: The layers of sediment excavated in Denisova Cave (top left) and its surroundings have yielded such artifacts as chipping tools (top right), a fragment of a pinky bone, and a molar. DNA in the bone and molar led to the identification of a new hominin group, the Denisovans.Photos: Courtesy of David Reich (top left, top right, bottom right); Courtesy of the Max Planck Institute for Evolutionary Anthropology (bottom left, middle right)

Perched in the Altai Mountains of southern Siberia, and overlooking the Anui River and its surrounding forest, is the Denisova Cave. It is not a particularly large natural structure, but its high ceilings, central limestone chimney, and location near abundant food sources have made it an inviting shelter for humans and animals for tens of thousands of years.

“It’s kind of a magical cave,” says David Reich, an HMS professor of genetics who traveled to the site this past summer. It was a rugged trip, covering 5,500 miles on a 48-hour journey that began in Boston, touched London and Moscow, and finished with a bumpy 10-hour van ride to the Denisova Cave, near Russia’s border with Kazakhstan. But Reich, whose affiliation with the Broad Institute of MIT and Harvard means he’s more often surrounded by gene sequencers than Stone Age tools, took the opportunity to step inside this remote refuge to witness the resting spot of ancient DNA that had been preserved in bone fragments buried deep in cave sediments.

For the past year, Reich and an international team of evolutionary geneticists have been coaxing information from that DNA. What they’ve found has changed our understanding of human history. 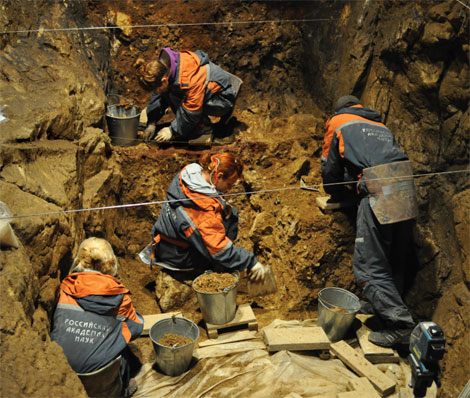 DOWN TO EARTH: Excavation of Denisova Cave, a site overseen by the Russian Academy of Sciences, is an ongoing venture involving international teams of researchers. Photo: Courtesy of David Reich