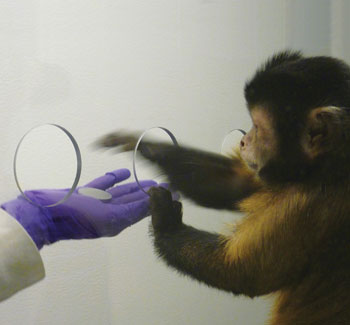 Allen St. John: How a Yale research team made history by teaching capuchins to spend money … and discovered that they’re just as smart—and stupid—as your financial advisor.

It’s a little bigger than a quarter and about twice as thick, but because it’s made of aluminum, it weighs roughly the same. It’s flat and smooth, except for what seem to be a few tiny bite marks around the perimeter. To you, it might look like a washer without a hole. To Felix, an alpha male capuchin monkey, and his friends at Yale University, it’s money.

“When one of the monkeys grabs a token, he’s going to hold onto it as though he really values it,” explains Laurie Santos, a psychology professor at Yale. “And the other monkeys might try to take it away from him. Just like they would with a piece of food. Just as you might want to do when you see a person flaunting cash.”

During the past seven years, Santos and Yale economist Keith Chen have conducted a series of cutting-edge experiments in which Felix and seven other monkeys trade these discs for food much like we toss a $20 bill to a cashier at Taco Bell. And in doing so, these monkeys became the first nonhumans to use, well, money.

“It sounds like the setup to a bad joke,” says Chen. “A monkey walks into a room and finds a pile of coins, and he’s got to decide how much he wants to spend on apples, how much on oranges, and how much on pineapples.” Continue HERE