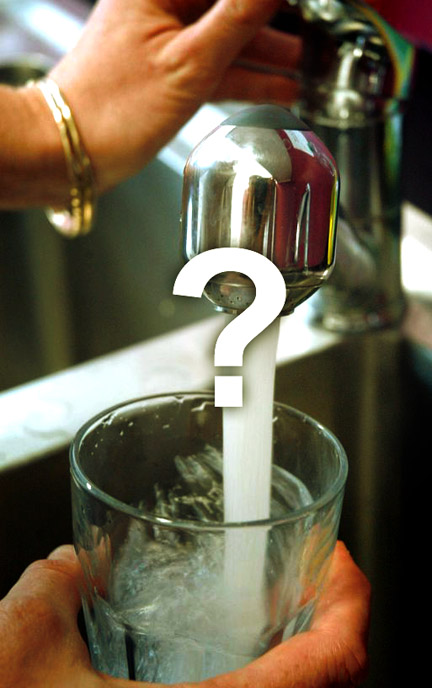 (Mom! What is that transparent thing coming out of the faucet?)

There is a LOT of information available about fluoride out there, but this info. is sometimes conflicting (e.g. Fluoride Information Movement vs. Fluoride Action Network ). How can we make up our minds about it? Why? After a modest research over net and some libraries, I felt the necessity to expose some studies and some facts that I find pertinent. Obviously, I ENCOURAGE you to do your own research…In any case, these links will lead you to some relevant sources.

From the Fluoride Action Network (an international coalition seeking to broaden public awareness about the toxicity of fluoride compounds and the health impacts of current fluoride exposures) website 50 Reasons to Oppose Fluoridation, I only present you 10 of those clear reasons.

01) Fluoride is not an essential nutrient (NRC 1993 and IOM 1997). No disease has ever been linked to a fluoride deficiency. Humans can have perfectly good teeth without fluoride.

02) Fluoridation is not necessary. Most Western European countries are not fluoridated and have experienced the same decline in dental decay as the US (See data from World Health Organization in Appendix 1, and the time trends presented graphically at http://www.fluoridealert.org/who-dmft.htm ). The reasons given by countries for not fluoridating are presented in Appendix 2.)

03) Where fluoridation has been discontinued in communities from Canada, the former East Germany, Cuba and Finland, dental decay has not increased but has actually decreased (Maupome 2001; Kunzel and Fischer,1997,2000; Kunzel 2000 and Seppa 2000).

04) There have been numerous recent reports of dental crises in US cities (e.g. Boston, Cincinnati, New York City) which have been fluoridated for over 20 years. There appears to be a far greater (inverse) relationship between tooth decay and income level than with water fluoride levels.
Modern research (e.g. Diesendorf 1986; Colquhoun 1997, and De Liefde, 1998) shows that decay rates were coming down before fluoridation was introduced and have continued to decline even after its benefits would have been maximized. Many other factors influence tooth decay. Some recent studies have found that tooth decay actually increases as the fluoride concentration in the water increases (Olsson 1979; Retief 1979; Mann 1987, 1990; Steelink 1992; Teotia 1994; Grobleri 2001; Awadia 2002 and Ekanayake 2002).

05) The Centers for Disease Control and Prevention (CDC 1999, 2001) has now acknowledged the findings of many leading dental researchers, that the mechanism of fluoride’s benefits are mainly TOPICAL not SYSTEMIC. Thus, you don’t have to swallow fluoride to protect teeth. As the benefits of fluoride (if any exist) are topical, and the risks are systemic, it makes more sense, for those who want to take the risks, to deliver the fluoride directly to the tooth in the form of toothpaste. Since swallowing fluoride is unnecessary, there is no reason to force people (against their will) to drink fluoride in their water supply. This position was recently shared by Dr. Douglas Carnall, the associate editor of the British Medical Journal. His editorial appears in Appendix 3.

06) Fluoride is a cumulative poison. On average, only 50% of the fluoride we ingest each day is excreted through the kidneys. The remainder accumulates in our bones, pineal gland, and other tissues. If the kidney is damaged, fluoride accumulation will increase, and with it, the likelihood of harm. Fluoride is very biologically active even at low concentrations. It interferes with hydrogen bonding (Emsley 1981) and inhibits numerous enzymes (Waldbott 1978).

07) Fluoride has been shown to be mutagenic, cause chromosome damage and interfere with the enzymes involved with DNA repair in a variety of cell and tissue studies (Tsutsui 1984; Caspary 1987; Kishi 1993 and Mihashi 1996). Recent studies have also found a correlation between fluoride exposure and chromosome damage in humans (Sheth 1994; Wu 1995; Meng 1997 and Joseph 2000). Fluoride forms complexes with a large number of metal ions, which include metals which are needed in the body (like calcium and magnesium) and metals (like lead and aluminum) which are toxic to the body. This can cause a variety of problems. For example, fluoride interferes with enzymes where magnesium is an important co-factor, and it can help facilitate the uptake of aluminum and lead into tissues where these metals wouldn’t otherwise go (Mahaffey 1976; Allain 1996; Varner 1998).

08) In some studies, when high doses of fluoride (average 26 mg per day) were used in trials to treat patients with osteoporosis in an effort to harden their bones and reduce fracture rates, it actually led to a HIGHER number of fractures, particularly hip fractures (Inkovaara 1975; Gerster 1983; Dambacher 1986; O’Duffy 1986; Hedlund 1989; Bayley 1990; Gutteridge 1990. 2002; Orcel 1990; Riggs 1990 and Schnitzler 1990). The cumulative doses used in these trials are exceeded by the lifetime cumulative doses being experienced by many people living in fluoridated communities.
Nineteen studies (three unpublished, including one abstract) since 1990 have examined the possible relationship of fluoride in water and hip fracture among the elderly. Eleven of these studies found an association, eight did not. One study found a dose-related increase in hip fracture as the concentration of fluoride rose from 1 ppm to 8 ppm (Li 2001). Hip fracture is a very serious issue for the elderly, as a quarter of those who have a hip fracture die within a year of the operation, while 50 percent never regain an independent existence (All 19 of these studies are referenced as a group in the reference section).

09) The fluoridation program has been very poorly monitored. There has never been a comprehensive analysis of the fluoride levels in the bones, blood, or urine of the American people or the citizens of other fluoridated countries. Based on the sparse data that has become available, however, it is increasingly evident that some people in the population – particularly people with kidney disease – are accumulating fluoride levels that have been associated with harm to both animals and humans, particularly harm to bone (see Connett 2004).

10) The US Public Health Service first endorsed fluoridation in 1950, before one single trial had been completed (McClure 1970). Since 1950, it has been found that fluorides do little to prevent pit and fissure tooth decay, a fact that even the dental community has acknowledged (Seholle 1984; Gray 1987; PHS 1993; and Pinkham 1999). This is significant because pit and fissure tooth decay represents up to 85% of the tooth decay experienced by children today (Seholle 1984 and Gray 1987).
Studies by Masters and Coplan (1999, 2000) show an association between the use of fluorosilicic acid (and its sodium salt) to fluoridate water and an increased uptake of lead into children’s blood. Because of lead’s acknowledged ability to damage the child’s developing brain, this is a very serious finding yet it is being largely ignored by fluoridating countries.

The recent Nobel Laureate in Medicine and Physiology, Dr. Arvid Carlsson (2000), was one of the leading opponents of fluoridation in Sweden, and part of the panel that recommended that the Swedish government reject the practice, which they did in 1971. According to Carlsson:

“I am quite convinced that water fluoridation, in a not-too-distant future, will be consigned to medical history…Water fluoridation goes against leading principles of pharmacotherapy, which is progressing from a stereotyped medication – of the type 1 tablet 3 times a day – to a much more individualized therapy as regards both dosage and selection of drugs. The addition of drugs to the drinking water means exactly the opposite of an individualized therapy” (Carlsson 1978).

How to remove Fluoride:
http://www.thebestwaterfilters.com/fluoride.html

If you need any more information let WANDERLUST know, if you have more info. and/or experiences please share it, and if you have any complains and comment feel free to rant.

2 thoughts on “Fluoride NO MORE (save yourself and others)”